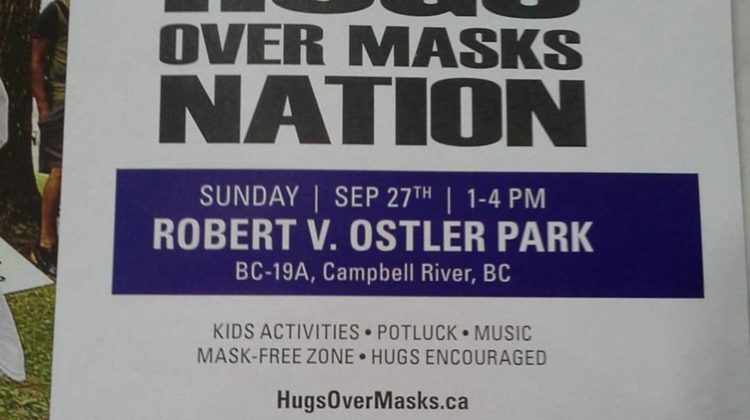 Campbell River’s mayor is voicing his anger over an anti-mask protest that happened last Sunday in the city’s downtown core.

Andy Adams says the city was not on board with a Hugs Over Masks Nation ‘celebration of life and freedom’ at Robert Ostler Park.

“When we’ve got numbers escalating right across the province and the country and North America, more hospitalizations, more people in ICU, just the stupidity of having an anti-mask event that was not sanctioned, no permit, and only had 17 people there is just ridiculous,” Adams said.

“We just remind people to be safe, to do their part, be respectful of distancing, wear a mask where appropriate, hand-wash on a regular basis, just so we can continue to enjoy all of the openings, and programs, and businesses that we’ve been able to do, that are going to be critical going forward as we get into the dark days of fall and winter.”

City manager, Deborah Sargent, said the city was called by a number of concerned citizens when the event was first announced on social media.

She added that this is a reminder to report these kinds of events, and people not following public health guidelines, to the RCMP.

“They do have enforcement powers and there’s a non-emergency line that people can call,” Sargent said.

We have reached out to the group Hugs Over Masks and have not received a response.