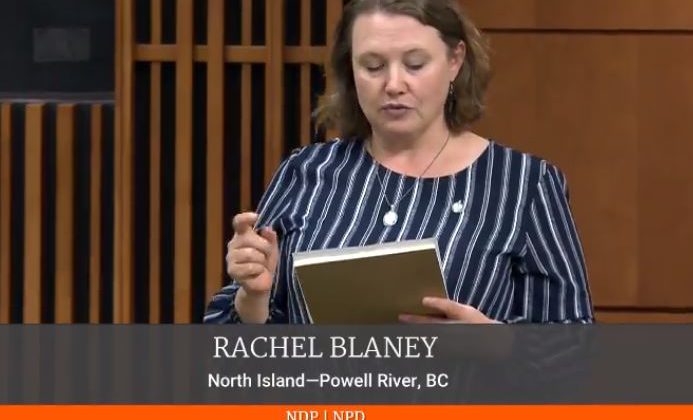 North Island-Powell River MP Rachel Blaney is frustrated with what she believes is a lack of support for Canada’s veterans.

The NDP Critic for Veterans is talking about her motion that was defeated in the House of Commons on Thursday.

It was to ensure that veterans don’t have to repay the Canada Emergency Response Benefit they’ve received, until after they get their disability benefits from Veterans Affairs Canada (VAC).

The federal Liberals were quick to point out that they supported the bill, which required unanimous consent in order to pass.

“We supported — and do support — the motion,” said Cameron McNeill, a spokesman for Veterans Affairs Minister Lawrence MacAulay.

Blaney said she heard a “no” from the Liberal side.

“But if they support it they can move it again tomorrow, and we will be happy to support it,” Blaney said on Thursday. “If the government were to take the action we’re calling for to support veterans, motions like this wouldn’t be necessary anyway.”

There are currently over 45,000 veterans waiting for their disability benefit applications to be processed.

A recent Parliamentary Budget Officer (PBO) report requested by Blaney confirmed that clearing the backlog in a year would require VAC to retain all their current temporary hires and hire an additional 392 staff.

The motion Blaney tabled took the PBO report into account and, she said, “sought to ensure that an additional injustice wouldn’t be piled on for those veterans in urgent need, already being treated unfairly by the Canadian government.”

“The Minister’s current plan is to clear ‘most of the backlog by 2022.’ Veterans shouldn’t have to wait any longer than they already have to get the help they are owed. These are people who have served this country, and now they’re just doing what they can to navigate a broken system,” Blaney said.

“The CERB was a chance for vets to support themselves and their families while getting the treatments they need. Veterans are absolutely not responsible for the situation at VAC and shouldn’t be forced to pay for the government’s mistakes.”