Vancouver Island deer being kept as a pet released into wild 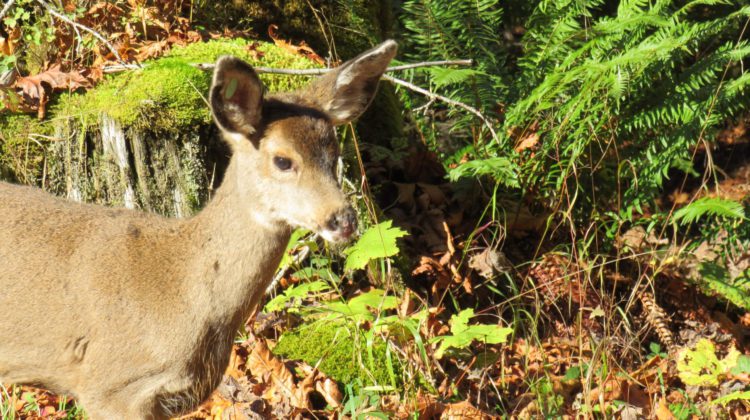 Photo of the deer on its release day. (Supplied by the MARS Wildlife Rescue Centre)

A deer that was being kept as a pet on Vancouver Island is now back in the wild.

In mid-August, B.C. conservation officers along with the RCMP rescued the animal from a home in Cumberland.

It was taken to the MARS Wildlife Rescue Centre in Merville, and was among the 14 young bucks that were released by the centre last week.

MARS manager of wildlife rehabilitation, Gylaine Andersen, said it took a while to get the deer conditioned to the wild.

“He was definitely a little bit habituated initially,” Andersen said. “So we decided the best course of action was to get him into one of the pens with our other deer so that he could have some normal interactions with other animals of the same species,” she explained.

Andersen added that once the deer was put into a pen with the others, it did very well.

“We didn’t have to recapture him, he was just hanging out with the other deer, and eating the natural foods that we offer, and we didn’t have to bottle feed him, which was good because we could limit our interaction with him.”

She said that while it was being kept at the Cumberland home, the deer was being bottle-fed and fed “a lot of inappropriate food for a deer” including watermelon, and different types of fruit.

Andersen said they tried to be as hands-off as possible with the deer so there wasn’t any further risk of habituation.

The deer that are cared for at MARS are usually between one and three weeks old and are often released in October when they are five to six months old.

The most common reason for admission is because their mom has been hit by a car and killed.

They are released in groups where they were originally found, Andersen explained.

Volunteers spent countless hours feeding and cleaning the fawns until they were ready to go back into nature.

“The deer, when they leave here, they’re no longer relying on us for bottle feeding, they’re eating all the natural vegetation we can offer, and they looked very strong and healthy and quite plump this year, so it was a good year for the fawns,” Andersen said.

Meanwhile, the person who kept the deer was charged with unlawful possession of live wildlife and ticketed $345 under the Wildlife Act.

The BC Conservation Officer Service is reminding everyone to leave wildlife alone.