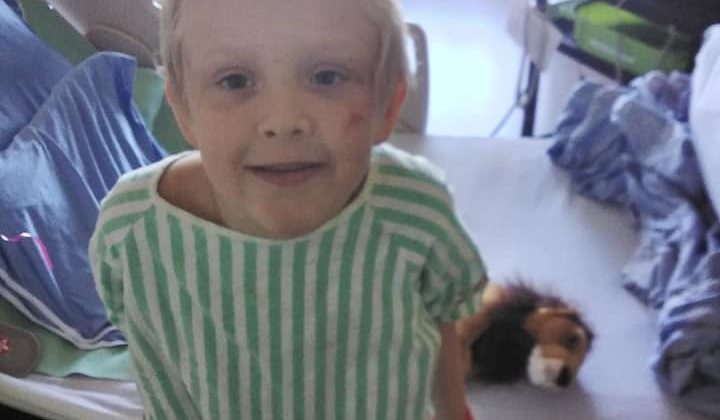 7-year-old John will have to learn to walk again after being run over in a Campbell River parking lot (Photo: Alicia Sewid/Facebook)

A Campbell River boy is suffering from serious injuries after being run over in a parking lot, and his family and friends are hoping you can help.

Seven-year-old John was outside the Real Canadian Superstore with his mom, Alicia Sewid, last Wednesday, October 21st when he was run over by an SUV.

He was airlifted via emergency helicopter to the BC Children’s Hospital in Vancouver, where doctors determined the extent of his injuries. Alicia’s cousin, Barbie Johnson, says John has a shattered pelvis.

He had to spend a few nights in hospital, before making his way home this past Sunday.

In order to walk again, Barbie says John will need to undergo physical therapy. Specialists say it could take weeks for him to recover.

“He has a very long road ahead of him,” Barbie says, “and at just 7-years-old, it breaks my heart.”

On behalf of Alicia, Barbie organized a GoFundMe page. So far, just under $4,800 has been raised.

Alicia’s 20-weeks pregnant with twins, and Barbie says the accident has added on an enormous amount of stress. She’s hoping those who can, will help support the family.

“They are going to need all the help they can get,” Barbie says. “Anyone that wishes to donate, whatever they can, every little bit helps. Your generosity will not go unnoticed.”

Reports say there was no indication the driver was speeding, and Campbell River RCMP are not considering charges against the man.