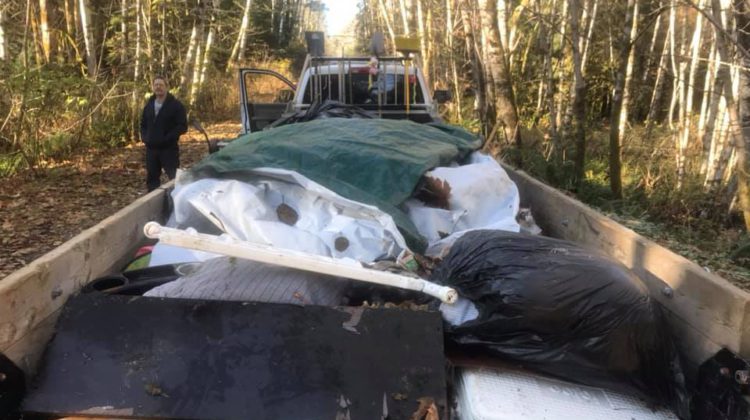 Volunteers removed around 1,000 kilograms of illegal dumping from the side of Iron River Road Campbell River. It included lots of toys that could have be recycled, repurposed, reused. Electronics that could have been taken to the Return-it centres. Large pile of roofing (plywood & shingles) and a mattress. (Jamie Barth, Facebook)

A Vancouver Island group is on a mission to stop people from using nature as their dumping ground.

He and other volunteers collect and properly dispose of illegally dumped garbage and construction waste, from Cook Creek north to Campbell River.

He goes around, identifying tip sites and telling municipal authorities, and cleaning the garbage up himself.

Barth says “at every step we attempt to separate the illegal dumping for proper disposal or recycling.”

When he moved back to the Comox Valley, Barth said he saw how much garbage was strewn along the backwoods.

So, on his own accord, he started picking it up.

“It was costing me a fortune in tip fees and I was always trained to say, ‘If you’ve got a problem, what’s the solution?’ For me the solution was to pick up the trash, clean up the area, so that others can enjoy nature without having to see some of these leftovers, per se,” Barth said.

The Comox Valley Regional District is on board, he noted. “The CVRD gives me a waiver for the year and it’s based on me telling them where the sites are, what it contains… If there is a danger of any evidence being destroyed – and there are sites that are known for dumping it there and setting fire to it – then I’ll hand the evidence over to the CVRD.”

Their latest cleanup happened over the weekend along Iron River Road just north of Elk Falls Provincial Park, where they removed 1,000 kilograms of illegal dumping.

Barth also offered a separate thank you to whoever removed a freezer, patio heater and second mattress from the dumpsite.

He says that this particular area is a popular spot for illegal dumping, pointing out that it wasn’t left behind by the homeless.

“This is people just going up and dumping their trash, for whatever reason, up the side of a logging road, in this case, a provincial park,” he said.

Barth, who has headed up the group since 2013, says it’s extremely frustrating to see illegal dumping continue.

He says it’s tough to not only stop it from happening but pinpoint exactly who’s doing it in the region.

“We need to see more education, more enforcement of what’s going on,” he said. “But saying more enforcement, it’s a challenge that some of those locations are so isolated and there are so many dumpsites, it would be challenging to enforce it without finding direct evidence to who did it.”

His message to the dumpers is simple: “It’s not right, what you’re doing. My biggest problem is when someone hires someone to remove stuff from their house – garbage, construction waste, etc. – and you pay them upfront, and I’ve seen it time and time again where it winds up in the bush. Saying that there are good, very good people who are picking up and dropping it off at the landfill. But there’s still that little part that we need to educate people on how to deal with that situation.”

He says the group picks up around 12 tons a year.