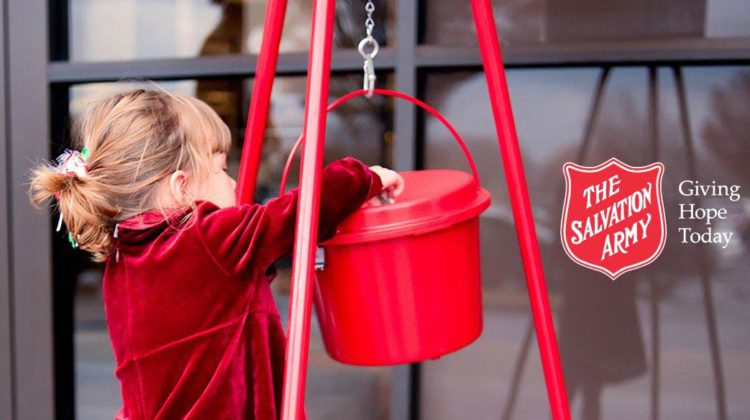 The Salvation Army is launching its annual Christmas kettle drive, facing what it says is a level of need not seen since the Second World War.

It comes as COVID-19 is making fundraising more difficult.

The iconic red kettles will start appearing in malls, grocery stores, and other establishments across the country as Sally Ann seeks to raise $23 million this year to help Canadians in need.

Funds raised through the campaign remain in the community where they are donated.

The nation-wide campaign is starting early, with more than 2,000 kettle locations across Canada.

The campaign relies heavily on volunteers who stand/sit by a kettle for a two-hour shift.

That equals 64 volunteer hours per day.

In Campbell River, donations can be made at a kettle location, via its online virtual Kettles site, or at the Ocean Crest Community Church at 291 McLean Street.

The Campbell River Salvation Army has some volunteers who have participated in this campaign for generations as part of family tradition.

It also says it’s blessed to have corporations, service clubs and local groups volunteer by “Adopting a Kettle” for a day or two, manned with their own staff.

Lt. Violet Hopkins of the Campbell River Salvation Army says locally, the goal of raising $85,000 is the same as last year.

Hopkins says they’re hoping to meet that goal because the need is so huge in the community.

“We’ve seen a huge increase in our food bank services,” she said. “We do food hampers here, as well, so we’ve certainly seen an increase in that. Families, seniors, people who have lost their job because of COVID… that type of thing.”

She said the number of food hampers they’ve put together has jumped from roughly five to between 20 and 30 a week.

Meanwhile, things are much different for bell ringers this year because of the pandemic.

In most cases, they have to stay outside, and Hopkins says that’s just one of many measures to keep volunteers and donors safe from the virus.

“All volunteers have had proper PPE’s so stores are requiring face masks, the kettle will have to be sanitized after each (donation) drop-off, we have to still keep a distance from the kettle, so the volunteer will give the proper six feet of (physical) distancing, so it’s going to be quite different for us,” Hopkins said.

COVID-19 concerns are also keeping some senior volunteers away from kettles this year.

“Just this morning, one of our volunteers who does three shifts a week… his doctor told him, ‘No, you cannot do that this year because you are immune-compromised,’” Hopkins related.

“So we just had to take off his shifts, so he had over 20 shifts, and we had to remove them due to his doctor’s instructions not to stand at the kettle this year.”