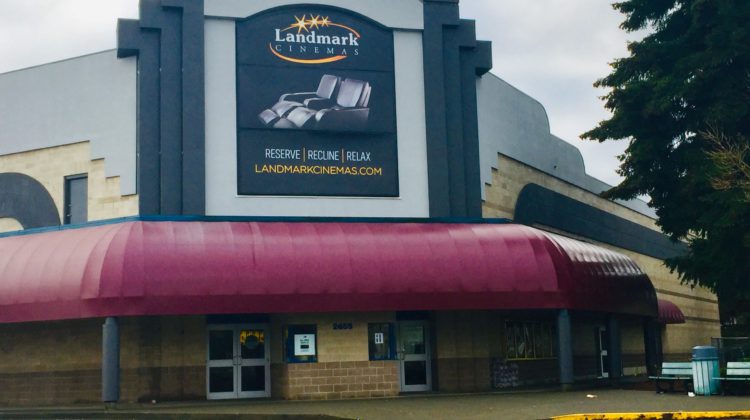 These are quite literally dark times for movie theatres across B.C.

Landmark Cinemas theatres continued to operate over the weekend but closed their doors today. This impacts the ones in Courtenay, Campbell River, Port Alberni, and Nanaimo.

Landmark CEO Bill Walker said the mixup of staying open last weekend, after the initial restrictions were announced on Nov. 19th, was not their fault.

“The confusion was on behalf of the government, whose website clearly stated that we were permitted to be open, so it was a bit frustrating to see the news the way it was portrayed yesterday, as though the industry hadn’t responded to the restrictions whereas it was clearly right up until 6:00pm or 7:00pm last night, it was still on the websites saying that theatres can in fact operate under the current guidelines.”

He’s also frustrated that, in his belief, going to the movies has been a safe experience throughout the pandemic.

“When we reopened, I had concerns,” Walker said.

“I was concerned that theatres would become part of the problem, not the solution. And as we’ve operated for several months, and had millions of guests through Canadian movie theatres, we’re not involved in contact tracing anywhere. We haven’t been contacted with suspicion of people contracting the virus in cinemas, suspicion of spreading it in our cinemas… there is nobody that can point, in Canada and North America, to any transmission that has happened in movie theatres.”

Meanwhile, Walker is holding out hope that Landmark screens will light up again on Dec. 7th, when the two-week suspension period is set to end.

He said theatres give people the opportunity to experience some sense of normalcy during these trying times.

“They can get out and enjoy a film, sit in reserved seating, socially distanced, enjoy some popcorn, and enjoy a night out with your cohort and your family.”

He pointed out that when you close venues such as movie theatres, that can be regulated, you’re left with private homes that can’t be regulated.

Walker said the latest closure is yet another blow to an industry that has been battered by the pandemic.

“We were off significantly, and with capacity restrictions and the lack of new movies there was a very stable base of loyal customers that we could tell were absolutely going to the movies quite frequently and were really enjoying some of the classics,” Walker said. “But there was no question there was a segment of consumers who either for a lack of content they were interested in, or because of general consumer confidence and sentiment around public gatherings during this pandemic we weren’t generating near the same numbers that we could expect pre-COVID.”

He said they knew there wasn’t going to be a recovery in the midst of a pandemic so they focused instead on keeping people employed and customers engaged until the day when there is a wide-spread vaccination available, and more people will start returning to the theatres.

Walker doesn’t believe that any of the Landmark theatres on the island are in danger of closing, permanently.