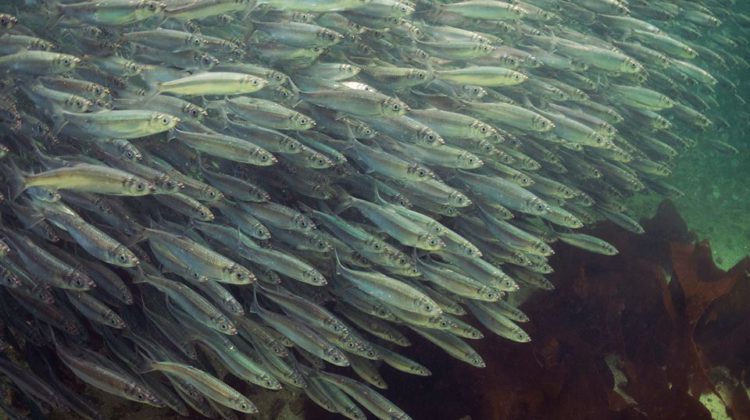 Conservancy Hornby Island has a high-profile backer in its efforts to protect herring stocks in the Strait of Georgia.

It’s been calling for a moratorium on the province’s herring fishery for the past four years.

A report commissioned by the group – and funded by the Pamela Anderson Foundation – says current protection measures are inadequate and won’t prevent the further decline of the species.

It was led by Dr. John Neilson, former Scientist Emeritus at DFO, and former Co-Chair of the Committee on the Status of Endangered Wildlife in Canada (COSEWIC).

The Neilson report says the waters surrounding Hornby and Denman are the epicenter of remaining spawning grounds for herring in the Strait of Georgia.

“Pacific herring are critically important to the health of the marine ecosystem on Canada’s West Coast, however the five stocks are depleted compared with historic levels and are close to their limit reference points. Even the Strait of Georgia has been in decline since 1995,” Neilson said.

“Current management approaches have not resulted in rebuilding and additional measures are urgently needed.”

The report comes as OCEANA Canada’s 2020 Fishery Audit lists Pacific Herring in the Strait of Georgia at higher risk, downgrading the species from “Healthy” to “Cautious.”

According to CHI, the report shows the Northern Gulf Islands now represent over half of the remaining important herring spawning grounds in the Strait of Georgia, comprising nine recognized major spawning locations lining the beaches and shores of Hornby and Denman Islands.

“I am concerned with the status of herring because it is directly related to the health of chinook salmon and indirectly southern resident orcas and everyone is concerned about that,” stated Dr. Neilson.

Protecting the Northern Gulf Islands and their surrounding waters from the commercial herring fishery could circumvent decline of this forage fish, a keystone species which chinook salmon and orca require as the foundation of their food web, according to the report.

Dr. Daniel Pauly, UBC Killam Professor and International Fisheries Expert who advocates the long-term economic benefits of halting the herring fishery until stocks recover said, “we are operating at the edge of sustainability and a collapse will happen. The (academic) advice to DFO would be, ‘Don’t fish it for a few years so that it will bounce back.”

The group says a recent study by the University of British Columbia has now shown that temporarily stopping fishing of major commercial species such as herring would lead to economic gains of up to 10 times above the status quo after 30 years.

A First Nations petition to federal Fisheries Minister Bernadette Jordan – led by the WSANEC Leadership Council, representing Tsartlip, Tsawout, and Tseycum First Nations – to place a moratorium on all commercial herring fisheries on the south coast of Vancouver Island has been gaining momentum.

Conservancy Hornby Island – which has amassed over 153,000 signatures to stop the herring fishery – has pledged its full support of the First Nations-led initiative, along with over 30 NGOs including the Association of Denman Island Marine Stewards, Pacific Wild, Sierra Club, Georgia Strait Alliance, Sea Legacy and environmentalists including David Suzuki.

Grant Scott of Conservancy Hornby Island notes that “herring for roe were worth up to $5000 per ton 25 years ago and are down to as low as $150 per ton recently.

He said this means that this “incredibly important forage fish” for salmon, cod, rockfish, halibut and indirectly killer whales are worth about 1.5 cents each.

“Is this getting maximum value for one of the most important species in the coastal BC marine food web?” Scott asked.

DFO’s consultation and feedback period for the 2021 Herring Fishery closed mid-November, and the Fishery opened on Nov. 20 for Food and Bait, with the Roe Herring Fishery scheduled to begin in March.

In response, DFO spokesperson Alexandra Coutts said Fisheries and Oceans Canada is committed to managing Pacific herring fisheries, to ensure that there are enough herring to spawn and sustain the stock and fisheries into the future.

“The stock assessment allows for fishing plans to be adjusted each year in response to changes in stock status.”

“The department’s management approach is designed to respond to a varying abundance of herring by adjusting fishing opportunities accordingly to protect the stock,” she added.

“Fishing opportunities are available in areas where the stock abundance of herring is sufficient to support sustainable fisheries. Commercial fisheries are not authorized to occur when stock abundance falls below a conservation threshold, called the Limit Reference Point.

This year’s harvest strategy will help to protect future stock health. DFO will continue to adjust management plans based on the best available science and data.”