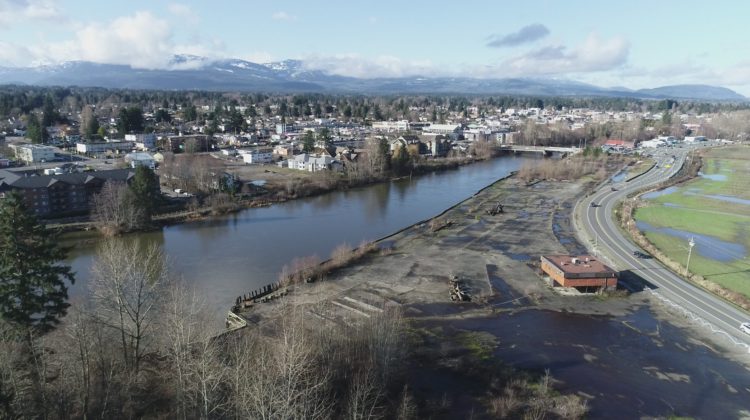 This is on top of the recently announced $650,000 dollars in provincial funding that will bridge the funding gap so the site can be purchased from Interfor.

The Comox Valley Project Watershed Society has been working to purchase and restore the site next to the river, near the estuary in the territory of the K’ómoks First Nation.

Senior project manager Tim Ennis says prior to acquiring the property, they had no ability to do any restoration work at all.

“Now that we’ve made our final payment, we do have a little bit of time ahead of us in which we need to follow through with the mechanics of conveying the title from Interfor to the new owners,” Ennis said.

Ennis said “every penny” raised from the community, or from other donors, will go directly to the project.

“A vast majority of the funding that we’ve raised so far has been for the acquisition of the land, and now we have the funding for that,” Ennis said.

He says with the land acquisition behind them, they’re turning their attention more to the restoration component of the overall project costs.

“There are other project costs besides just the restoration but that’s the biggest piece that’s outstanding because it will be a fairly expensive piece of work.”

As for the question surrounding the overall completion of the project, Ennis says the answer is “it depends.”

“It depends on how the funding for the restoration comes together. If we’re lucky in a best-case situation, that we had all the money we needed to complete the project upfront, then we could proceed pretty much right away and we would have it done in, 18 months or something like that.”

Ennis says this scenario is unlikely.

“What’s more likely is we’ll have funding coming into the project over time and we will break the project down into phases,” he explained.

“For example, removing the buildings is the first thing I can see happening. The removal of the concrete will be the second phase. Then we’ll get into what is probably the most expensive component… which is recontouring the land back to its more appropriate elevation that will support the vegetation that everybody is familiar with, and commonly sees downstream at Hollyhock Marsh.”

Ennis noted that the society has funding applications “out there” for the restoration, and holds out hope that they will be successful.

He says they’re also hopeful the federal government will come to the table: “They haven’t yet and so that would be another example of a funder that we would look to, to support the project.”