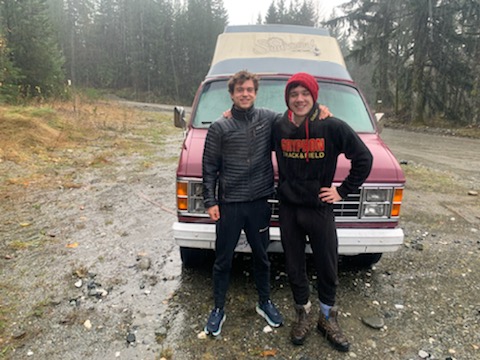 Mission accomplished for a pair of teens raising funds and awareness for single parents.

The 19-year-olds set off  from Port Hardy on Nov. 15th and arrived in Victoria on Monday, while raising $12,000 dollars along the way.

The funds will be used to help fund counselling, school supplies, clothing and goods, mentoring and education, and parent coaching.

During their journey they took turns between running and driving their support vehicle, a 1983 Dodge camper van named ‘Pippi.’

The trip wasn’t without its challenges. On Nov. 18th, Amos got into a fender bender when a pickup truck clipped ‘Pippi’ just north of Campbell River.

“We only lost a hubcap,” Roberson said.

Overall, Robertson said it was a challenging yet fulfilling experience.

Robertson said his body didn’t hold up as well as he wanted it to: “I started getting some problems with my achilles which I iced up. I had to start walking for a couple of the legs, just to save my achilles, I didn’t want to further dig a hole and make it worse.”

Amos says both have experienced first hand the struggles of being raised by a single parent and hope the money raised gives “single parents some respite and support from their challenging lives.”

He believes the cause resonates with many people.

“People see us putting in the work, trying to give back to this cause that is very close to our heart,” Amos said. “I think that is just at the core of it. Both me and Joe were raised by single parents and I think a lot of people have had that experience – either being raised by them, or they are (single parents themselves).”

Robertson says he has huge respect for his mom, who handled the workload of being a single parent for many years.

“My parents split when I was two years old,” he shared.

“Pretty much from when I was two ’til 10 my mother was a single parent, and I saw how hard she worked; she worked extremely hard. I have two other siblings so she was raising us with three kids and she’s an art teacher, and I saw how hard she worked and there were a lot of struggles. I just wanted to give back to that community because I know it can be really, really hard, especially this time of year, as well.”

Amos is a filmmaker and writer, who plans to document the run and later turn into a short documentary.