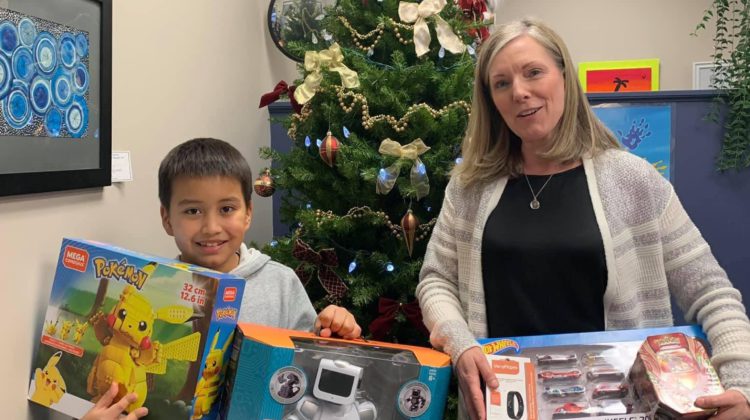 A Campbell River boy is paying it forward this Christmas.

For 10-year-old Dreyton Jackson, what started as a crushing loss of a $100 gift card has evolved into a mission to help other kids.

His mom Shelly Hamilton says the card went missing – and presumably stolen – from their car.

She shared what happened on a Campbell River group Facebook page, as a reminder to others not to leave valuables in their vehicles.

“When I posted it I didn’t want anybody to be very negative about it because it’s just a mishap, like, these kinds of things happen, and we were, unfortunately (among) the people that it happened to,” Hamilton said.

What happened next was quite the opposite: “This lady commented, saying she was going to accept money to get Dreyton’s card back. I did not expect positive feedback from this at all.”

It opened the floodgates of generosity in the community, with strangers offering to help, including separate donations of $50 and $100.

Dreyton soon realized the donations they received were way more than what was on the gift card, so he decided to give back.

He didn’t want to pick just one person to help, which spurred his idea to give all his near new or gently used toys away to kids who won’t get much, if anything, this Christmas.

Hamilton says her son has a lot of like-new toys that will bring a lot of joy to someone else this holiday season.

“He’s got some pretty big remote controls, he’s got a bunch of books, and Nerf guns and stuffies, he’s got Lego and cars… he’s got all the boys stuff, really.”

The challenge was giving away his toys with COVID-19 safety protocols in mind.

“What we will do is we will wrap them now, so after we sanitize them and they’re in their wrapping, they’ll be in there for a while, they’ll be sitting there for more than two weeks, I’m sure,” Hamilton explained.  “We’ll be sanitizing our hands and wearing masks while we do it (wrap the toys).”

Hamilton says each toy will be given away to someone in the community.

“I’ll post the picture on the group (Facebook page) that I made, with the age, and I could either drop off his present, or somebody could come pick it up with contactless pickup and drop-off, she added.

The group is for kids, youth, adults who want to try a new Christmas tradition of used gifts. You can link to the group here.

Hamilton says she can’t count how many times she received gifts which sometimes had gone unused or forgotten and are like new.

“This is a place to post without judgement, maybe you are in need or maybe you’d like to try a new sustainable gift giving tradition,” Hamilton said on the page.

“Our goal is that used gifts (are) normal and accepted by all ages of our community and surrounding areas.”

Giving to others is not new for Drayton who donates most of the money he gets for Christmas to the Angel Tree.

“That’s, like, his favourite thing to do,” Hamilton said. “He loves giving to kids who don’t have as much as he has. He sees himself as blessed and he’s a very humble kid.”

Hamilton says she is floored by her son’s thoughtfulness.

“He never ceases to amaze me. He has the biggest heart and he always thinks of these crazy ways to help other kids and this is just one of the many ideas that he’s had.”