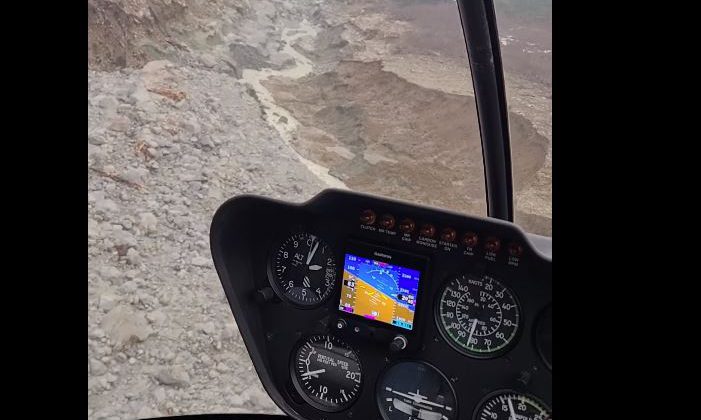 A Campbell River helicopter company has dramatic video footage of a devastating landslide in a remote area near Bute Inlet.

49 North Helicopters pilot Bastian Fleury says they were made aware of an unusual amount of wood floating in the inlet on B.C.’s central coast, north of Powell River.

Last Thursday they flew over the area to take a look.

The company posted on Facebook that what they found, might have been “one of the biggest landslides the west coast has had in the last few years.”

Fleury said it’s just a huge landslide:” “I’ve never seen anything like that. It’s about 12 kilometres long and it came straight from the glacier, and it came all the way down to the Southgate River, so it’s pretty massive.”

“It’s destroyed lots of trees and lots of wildlife involved, too.”

Brent Ward from Simon Fraser University’s centre for natural hazard studies, said early in the morning of Nov. 28th, a large rock failed and hit the toe of a glacier, before turning the corner and creating a huge displacement wave, estimated at between 70 to 110 metres high that overtopped the outlet of the lake, and caused major erosion.

“The lake drained, lots of water flowed down Elliot Creek causing major erosion, and then a whole bunch of sediment accumulated on the Elliot Creek fan, went into the Southgate River, and likely caused a turbidity current,” Ward explained.

There has been a glacial lake outburst flood, Elliot Creek just east of the head of Bute Inlet. Thanks to Interfor ground crews for forwarding the images to Pierre Friele. Details are sparse but appears part of glacier failed and hit lake. Location and satellite to follow. 1/3 pic.twitter.com/Umvn6nybaP

Ward said nature will heal itself eventually but there have been significant effects.

“Obviously there was a bridge taken out, I believe there were a couple of cabins on the fan that have been impacted but probably not destroyed but there have also been a lot of fisheries resources that have been affected so that fan was a very important coho habitat,” he said. “The Southgate is also a very good chum habitat and so these have really been negatively affected.”

He said it’s going to “take a lot of years” for the fish to come back.

Fleury is also worried about the wildlife in the area.

“I’ve seen wildlife down there, I’ve seen elks, there’s lots of wildlife, and I know the salmon from the river (is there) so it’s probably not good.”