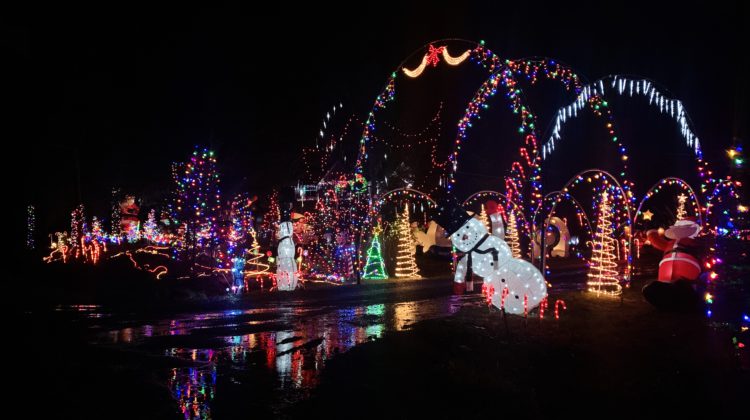 Carl Sweet and his family are behind the massive display on Vaughn Road, just off York Road (Photo: Ethan Morneau, MyComoxValleyNow.com staff)

A holiday display like no other, tucked away in a secluded Vancouver Island neighbourhood.

Carl Sweet and his family are behind the massive display on Vaughn Road in Campbell River, just off York Road. No exact address is needed, you won’t miss it.

The lights turn on every night, until the first of January.

If Sweet had to take a wild guess, he’d say there are between five to seven thousand lights out front of his home right now. On top of that, 23 blow-up ornaments.

Sweet says they’ve been putting out a display for the past 13 years, but it keeps growing. He says it certainly wasn’t this big when they first started.

“It’s from acquiring decorations, blow-ups, more lights and stuff like that over the years. It’s really only come to be this big over in the last three years since we’ve moved out to Vaughn Road.”

It’s a collaborative effort, Sweet says, as each year extended family and friends come together and offer ideas. They’re always helping to think of a theme that’s a little different from years past. 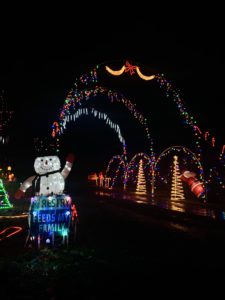 “My mom works at some thrift stores in town, so she always says ‘Hey, there’s some blow-ups here that are in good shape if you want them.’ She always brings them home for me.”

The lit-up archway lining the driveway, a major addition this year, was an idea from Sweet’s friend.

Sweet says they’ve got a good system going, and he usually starts pulling everything out from under the house in early November.

“We do lots of testing of the lights in the garage before we haul them down the driveway and wrap them around trees,” he says. “There’s nothing more disappointing than wrapping the trees or getting something set up, and you go to plug it in and only half the strand works.”

According to Sweet, it takes a couple of weeks to go through all the lights and test everything before fixing what’s broken. Then, another two weeks to get everything set up out in front of the house.

“The lights go on December 1st, and then weather pending, I try to get them down January 1st. I’m a stickler for only having Christmas lights on for the month of December.”

With a big holiday display, comes an audience. Sweet says he loves putting up the display every year, and loves that people enjoy driving by. He says it’s rewarding, not only for himself and his family, but for the public as well.

“I don’t think Vaughn Road sees this amount of traffic for the rest of the year,” Sweet says. “It puts smiles on people’s faces. I kinda do it for myself too, because I’ll just go stand out there by myself and walk back and forth and look at it.”

Sweet is inviting people to come by, park their car, and do the same, while keeping a safe distance from others.

“If you do a quick drive-by, you will certainly miss something,” he says. “There’s lots to see.”

And, with numerous restrictions in place due to the ongoing pandemic, Sweet thinks Christmas lights are playing a vital role in adding some extra cheer this holiday season.

“Really, what else can a family do together? Some people have heightened awareness of COVID, or are more sensitive to it, so going out to places isn’t an option. Grabbing a coffee, going for a drive and staying with your close group is much nicer and much more comfortable for a lot of people.”

Sweet says there are numerous other impressive displays out there right now, and he believes a lot of Campbell Riverites have stepped up their game this year. To see photos and the locations of other displays around town, he’s encouraging you to check out the Campbell River Christmas Light Displays Facebook group.

“I think everybody’s come to the realization that it’s just a way to brighten everybody’s outlook right now and give something for people to do, and go and see.”