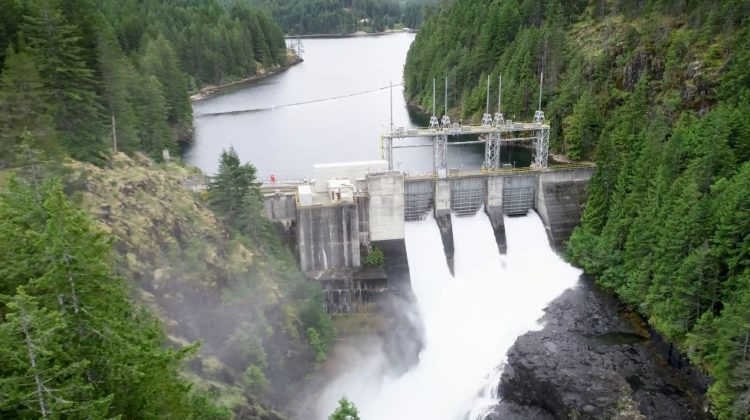 Video still supplied by BC Hydro.

BC Hydro says the planned seismic upgrade to the John Hart Dam is taking shape.

BC Hydro is expecting to file an application for the project with the BC Utilities Commission this year, with hopes of getting it approved by 2022.

If that happens, construction is expected to begin in 2023 and be complete around 2029.

BC Hydro started the project in 2014 to find the best way to upgrade the dam west of Campbell River, so that it can withstand a severe earthquake and maintain downstream public safety.

“Over that time, we have been meeting with First Nations, government agencies and stakeholders on the project as we refined the design, and considered community interests,” said BC Hydro spokesperson Stephen Watson.

“We now have a plan in place where once these upgrades are complete, it is our expectation that the John Hart Dam would withstand a severe earthquake.”

In early December, Watson said BC Hydro provided another project update to their Campbell River Hydroelectric Facilities Liaison Committee, made up of about two-dozen stakeholders and government agencies.

“We’ve been talking to the committee about the planning of the various segments of the upgrade at the over 800-metre-long dam, and at the last meeting, we went over construction planning and how we think this work could be completed,” said Watson.

A few months ago, BC Hydro released its first project video outlining the project need and the various components of the upgrade.

“Protecting water quality within the John Hart Reservoir is one of the biggest project focuses, particularly when we’ll be dredging material out and then placing new material as part of upstream earthfill berm improvements to the dam,” Watson said. “During that period, we will have a floating walkway around the work zone with silt curtains hanging from either side, down to the reservoir bottom, to contain the turbid water.”

The procurement process for the project may begin in the summer. BC Hydro and the Campbell River and District Chamber of Commerce have again partnered together to provide jobs and procurement information at majorprojects.ca.

“As a former City Councillor, through BC Hydro’s annual City Council updates, and now as the MLA, I have and will continue to follow this proposed project closely,” said North Island MLA, Michele Babchuk. “It’s a very important capital project for our community, and I’m pleased to see it continue to advance with some significant milestones planned in 2021.”

“As a long-time member of BC Hydro’s liaison committee it’s been interesting to watch the project develop, and at our last committee meeting, to see the various components of the proposed dam safety upgrade along with how they may be constructed,” said Campbell River Mayor, Andy Adams.

“It was also good to continue to see BC Hydro’s ongoing planning in protecting water quality within the John Hart Reservoir during the construction phase, which is very important to the City and the community. The project continues to move along in the right direction.”

Those two dam safety upgrade projects may begin construction in 2024.