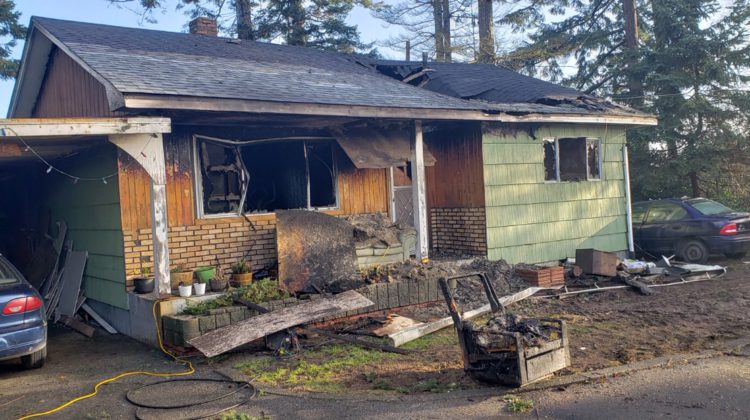 The investigation continues into what caused a house to go up in flames just south of Campbell River.

At around 3:30am Sunday, fire crews were dispatched to the 3700 block of South Island Highway.

The initial 9-1-1 call indicated a fire on the roof, however, when crews arrived on scene, Campbell River fire chief Thomas Doherty says they noticed the fire quickly spreading.

Doherty says the investigators told him that they were focusing on the attic space.

He doesn’t believe the home is salvageable.

“Based on the age of it and the structural damage to the roof, I would say it’s probably going to be completely destroyed, and just a teardown,” Doherty said.

CR Firefighters battle structure fire in the 3700 Block South Island Hwy early this morning. 1 person transported to hospital. Cause is under investigation pic.twitter.com/bzj2LOrB83

According to Doherty, no one was in the home when the fire started.

“There were three people there,” he said. “They arrived home and discovered the fire, they went inside and saw the smoke and the fire and vacated.”

One of the residents did sustain injuries when trying to extinguish the blaze.

He says that person was sent to the hospital.

Doherty said 16 firefighters responded and they knocked the fire down “fairly quickly,” probably within 30 minutes of arriving at the scene.

The Campbell River RCMP assisted in the investigation and Const. Maury Tyre says at this point, the cause is not believed to be criminal in nature.