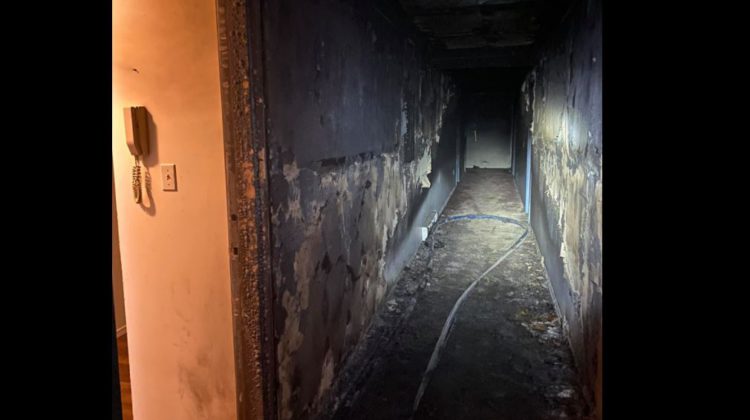 An apartment fire in Port Hardy has displaced at least two dozen tenants.

According to the Port Hardy RCMP, several people were hurt after they jumped out of windows to escape the blaze that broke out just before midnight Sunday at the Town Place Apartments C Block.

“I think we have a couple more that will probably be coming just because they were in hospital care while they were waiting, but we have 24 (residents) currently, at a hotel here in Port Hardy,” she said.

“They are being cared for by Emergency Support Services, and there is an extension in place where EMBC (Emergency Management BC) is covering them (at the hotel) beyond the three days.”

She explained that whenever there is an evacuation or emergency in the district, EMBC covers the lodging through a referral system through ESS.

“So our emergency support service director, Susan Bjarnason, reached out to the hotel which also helped the district out during its last evacuation situation.”

Meanwhile, the investigation continues into the fire that firefighters found within a second-floor hallway.

Port Hardy’s All In Family Support Services is doing its part to support the fire victims.

It has started a donation drive for clothes and food hampers first and then in the following weeks furniture and household appliances.

The business noted in a Facebook post that the fire has impacted babies, toddlers, school aged children and adults.

“Please bring anything you’d like to donate in good clean condition as All in has limited staff and need to spend time on the families.

Donations can be brought to 5-7035 Market Street. Look for the Green dragonfly.