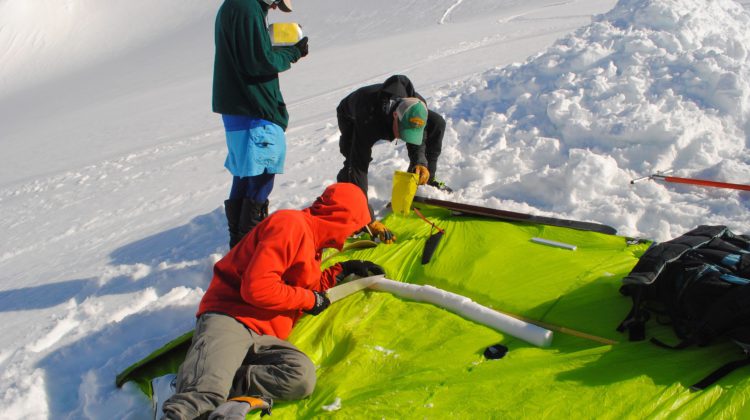 Cutting samples from a snow core, to measure the density of the snowpack. Kokanee Glacier. (Supplied by Jill Pelto)

The snow is piling up on mountains across much of B.C.

The provincial snowpack average has increased to 122 percent from 115 percent on January 1st.

According to new provincial data, most regions have experienced an early start to the 2020-21 snow accumulation season, with most o above normal for the Dec. 1st snowpack.

“The first half of January was very stormy with several frontal systems affecting the province, particularly the South Coast, Vancouver Island and the southern Interior and resulted in rapid mountain snowpack development,” the province said in a bulletin.

By January 15th, on average, approximately 55 percent of the total seasonal snowpack has accumulated.

Most regions in the province have above-normal snowpack for Jan. 15th. Regions that are closer to normal for this time of year include Liard and the East Kootenay.

The province says there is a 95 percent likelihood that La Nina conditions will persist through the winter/spring months.

Typically, La Nina years result in cooler and wetter weather conditions for B.C. The overall impact of La Nina on snow can be variable, but on average, areas in the southern portion of the province tend to have higher than normal April 1st snow basin indices.

Provincial weather conditions for the week following January 15th are expected to be relatively cool and dry through most of the province.

The Feb. 1st Snow & Water Supply Bulletin will be issued on Feb. 9th.

It will provide a more detailed and comprehensive summary of the Feb. 1st snowpack statistics as it also includes the Manual Snow Survey measurements.