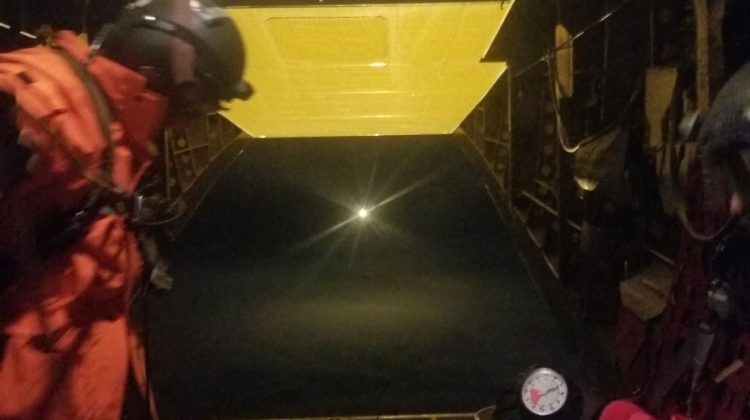 The 442 Transport and Rescue Squadron, based out of 19 Wing Comox took part in a major rescue over the weekend.

The Joint Rescue Coordination Centre (JRCC) in Victoria was asked to dispatch crews from the base Saturday night to help crews near Nanaimo in the medical recovery of an injured hiker on Mount Benson.

A helicopter team from 19 Wing was sent to the site but were unable to lower their SAR Techs due to poor weather conditions.

So they ended up hovering around  7,000 ft and assisted by dropping flares into the night sky to provide visibility for Nanaimo Search and Rescue members.

Guided by ACSO (air combat systems officer), Captain Paige Campbell, the Buffalo managed to provide near-constant illumination for over an hour to the rescue effort below.

“It was a total team effort on board the Buff with the GSAR crew below. Our team synergies allowed us to work smoothly which enabled this mission to be a great success,” said Major Ryan Port, Aircraft Commander of RSCU 462.

Nanaimo Ground Search and Rescue says the injured hiker was evacuated off the mountain and transferred to BC Emergency Health Services Paramedics.

The 19 Wing Buffalo returned to Comox, ready for her next mission.

Search and rescue crews are reminding you that conditions are extremely icy at higher elevations and weather can change quickly during these winter months.

They are asking you to plan ahead, leave a trip plan, and ensure your winter hiking essential gear contains items like microspikes or trail crampons.