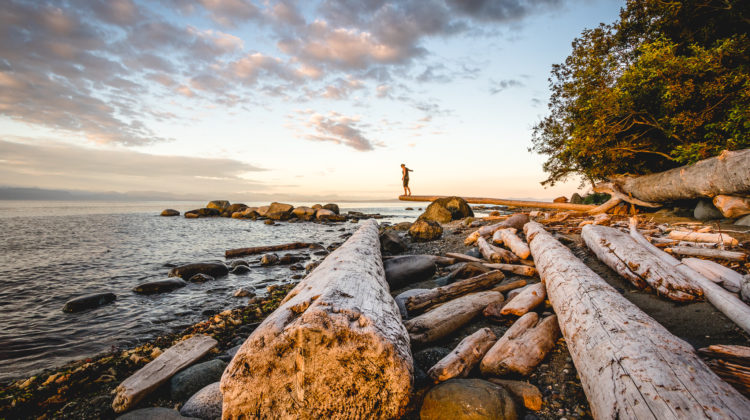 For Cumberland’s Sara Kempner, home is driftwood and rocks scattered along a Vancouver Island shoreline.

It asked contestants to submit an image that shows what home means to them.

“This is a self-portrait I took while visiting my parents at the property I grew up on, and it is an homage to my childhood,” Kempner said in her submission.

“We were fortunate to have the beach as our playground as kids and I truly believed that this place shaped me into the person I am today. Being creative and adventurous outside as a child translated into a lifelong love of the outdoors, which is now reflected in my overall lifestyle as well as my photography. I will be forever grateful for this beach and all it taught me.”

From hundreds of entries showing homes, backyards, neighbourhood parks, family members and family pets, the magazine’s judges chose a first, second and third place entry whose photo and caption both depicted the feeling of home.

Kempner says she didn’t have to reach far into her memory bank for inspiration.

“When we were kids we used to see how far we could make it down the beach running on the logs so it was kind of a shot I had in mind as an adult to recreate the games we played as kids down there, growing up.”

She noted that for the most part, the image was all natural and there was very little photo editing necessary.

“I shoot in what’s called raw so it’s a raw image and then a little bit of tweaking and light room, with lights down and blacks down a little bit. I lucked out on the light that night, it was sunset and it was just gorgeous light.”

Kempner said she was super surprised to find out that her photo was chosen as best in Canada.

“They emailed me to confirm it was my image and that it hadn’t been ‘photoshopped’ and that type of thing, and that I owned the copyright, and then when I confirmed that, yeah, they had said that I had won,” Kempner said. “I didn’t even tell anyone for two weeks because I didn’t quite believe it, it was just kind of over email. I waited until they actually announced it before I told people, because it’s kind of unbelievable for me.”