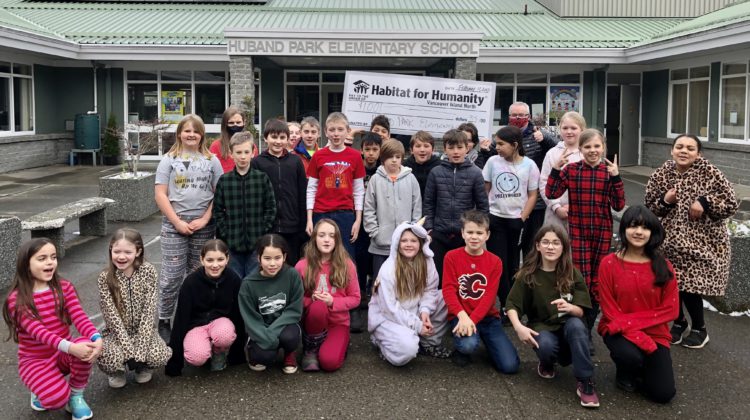 It just goes to show that when students come together, great things happen.

Habitat for Humanity’s annual ‘Meaning of Home’ contest inspires grades 4, 5 and 6 students to write a poem or essay about what home means to them, in an effort to help raise money for local Habitat projects.

However, the grade 5 class at Huband Park Elementary in Courtenay took things to the next level.

After participating in the contest as a classroom, the students then brainstormed ideas about how they could further impact their school and community.

They decided to hold a fundraiser for Habitat VIN, selling ‘Valentine’s Candy Grams’ to their fellow students for $1 each. This eventually led to a grand total of $1,001.00 raised.

The funds will now go towards Habitat’s affordable housing projects in the Comox Valley.

And, in addition, each essay or poem they submitted to the contest will result in a $10 donation on behalf of Sagen, the contest’s sponsor.

The student’s hard work went beyond the expectations of Habitat VIN’s team, with executive director Pat McKenna adding that the “compassion and ingenuity shown by these students is inspiring to all of us.”

McKenna says there’s still time to enter the ‘Meaning of Home’ contest, which runs until February 19th. Entries can be submitted through this website.

Winners will be announced in June, with the grand prize winners of each grade set to receive a $30,000 grant for the local Habitat home build of their choice.