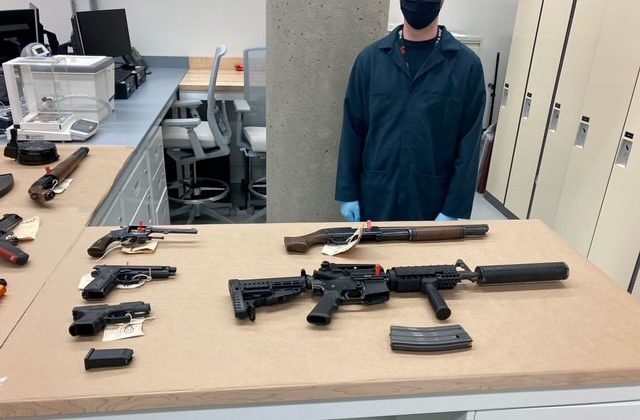 Police in British Columbia will have one more tool to help suppress organized crime and gun violence, thanks to a newly opened provincial forensic firearms lab. (Photo provided by the Government of B.C)

Police officers throughout the province now have another tool to help battle organized crime and gun violence.

The lab will serve as a centrepiece for investigations, helping police analyze illegal firearms that were used for criminal activity.

“The newly established Provincial Forensic Firearms Lab will be a valuable asset in the arsenal to target and reduce gun violence in B.C. This lab is a part of a comprehensive provincial response led by the Organized Crime Agency of British Columbia and the Combined Forces Special Enforcement Unit of British Columbia, and is already prioritizing the analysis of firearms and casings linked to gang violence,” explained Pound.

“Evidence secured within this new facility will support investigations and prosecutions of individuals and criminal organizations who pose the greatest risk to public safety in B.C.”

Funded at $1.2 million through the federal Guns and Gangs Violence Action Fund, the province says the lab is a key component of its Gang Suppression Action Plan, which targets multi-sector law enforcement, government and community support and disruption of organized crime and associated violence.

The lab announcement comes as Prime Minister Justin Trudeau announced that the federal government will be releasing more details on Bill C-21, which would ban assault-style weapons across Canada.