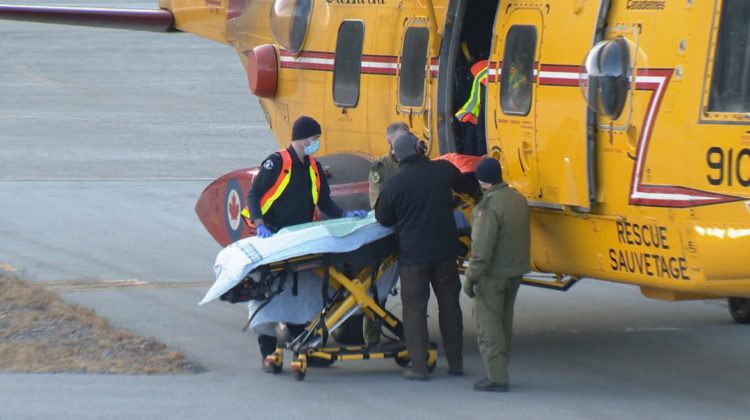 A military search-and-rescue helicopter arrives at an airfield in Squamish after rescuing two men from the backcountry following an avalanche. (Photo taken by Simon Little, Provided by Global News)

It was another successful mission for crews at 442 Transport and Rescue Squadron out of 19 Wing Comox.

Last Thursday, the team was dispatched by the Joint Rescue Coordination Centre in Victoria to help evacuate an injured skier and their companion in the Squamish backcountry.

The call came in after the two were caught in an avalanche and a local SAR helicopter couldn’t make it to the area due to strong winds.

Media Relations Officer for 19 Wing, Captain Alexandra Hejduk told our newsroom that once the team got the call, a Ch-149 Cormorant helicopter and its crew from 442 Transport and Rescue Squadron flew to the area.

Three search and rescue technicians hoisted down to the two skiers to secure them and bring them up to the Cormorant.

She confirmed that both people were flown to a local Squamish airport where they were taken to the hospital.

Hejduk says it was a successful medical evacuation with great teamwork between 442 Squadron and BC EHS, and that crews are “always grateful for the support from our stakeholders and the local community during these missions.”