Courtenay’s vulnerable populations might get new location this May 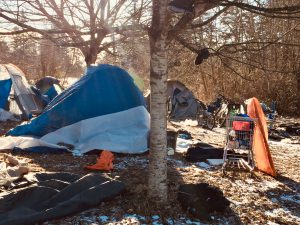 A homeless camp was set at the Kus-kus-sum site. (Troy Landreville/MyComoxValleyNow.com staff)

Courtenay council is considering a new location for the valley’s homeless population to go to for help.

At council Monday night, staff went over a request from the Comox Valley Coalition to End Homelessness Society and the Comox Valley Transition Society on the possibility of extending its current contract for the location on Cliffe Avenue to prepare a move to a new location on Puntledge Road.

In a letter to staff, the CVTS says since opening on February 12th, all 8 temporary shelter beds have been at capacity every single evening, with a total of 302 stays.

The current contract for the location at 685 Cliffe Avenue is set to expire on March 31st, and the two organizations asked council to consider extending the time frame to the end of April.

That’s because they are eyeing a possible new location at #2, 239 Puntledge Road starting May 1st. The letter highlights that that is larger than 685 Cliffe Ave meaning staff would be able to safely serve more individuals and could double temporary shelter capacity from 8 to 16 beds.

Councillor Manno Theos shared his concerns with extending the current contract, including some of the issues that have been reported in the area related to the warming center.

“This has been in many ways a bit of a disaster.  I’m talking about being realistic here. I know someone who is going to the warming center who has mental issues but even he is in fear of being in that warming center. He’s been beaten up, he’s been robbed there, I’m hearing stories that are just very disappointing,” explained Theos.

“This is just not a positive situation. I can’t see it moving to another location if it continues in this direction to be something positive at all. Things need to change and I’m skeptical if I can even support this right now.”

He asked other council members to consider introducing some type of changes for the center if they approve the one month extension.

Mayor Bob Wells explained that could be an option, if the council could provide specific details for those changes, which were not expressed at the meeting.

For now, the center along Cliffe Avenue will continue to operate as usual. All Courtenay council members voted in favour of the extension, except councillor Theos.

The discussion, and all decisions related to the possible new location on Puntledge Road will be discussed at a later date.