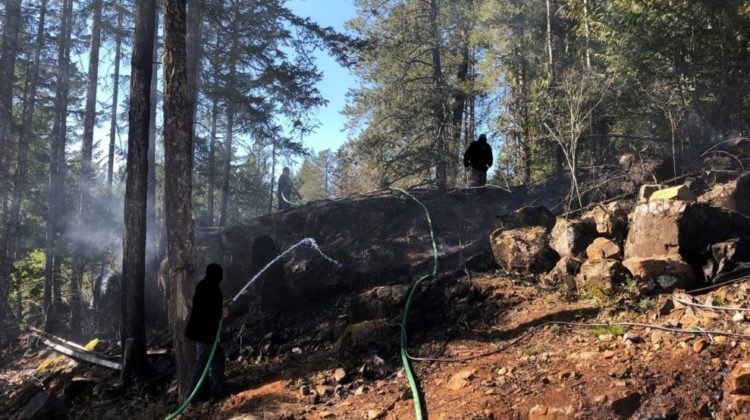 Fire crews in Campbell River are being credited for stopping a wildfire in the McIvor Lake area from spreading.

At around 4:00 pm yesterday (Thursday), deputy chief Kelly Bellefleur says the local fire department was notified of the blaze.

“Crews from both our stations responded,” he says. “In total, we had 14 firefighters, one fire engine, our water tender, and our wildland fire truck on scene.”

According to Bellefleur, the fire was “accidentally caused by a homeowner on his property.” When crews arrived, they found a ground fire about 50’ x 50’.

Bellefleur says the wildfire was quickly spreading to nearby standing timbers; but fortunately, thanks to quick action from the homeowners and firefighters, “the fire was brought under control.”

“The fire had reached the standing timber and was starting to climb up into the trees. If it had gotten in there and gotten ahold, it easily could have run away and caused massive damage to that whole recreational area,” Bellefleur explains.

“Certainly, any time we have drying trends, hotter weather, and fire in a forested area… that doesn’t mix well.”

He says crews then spent a few hours overhauling the fire to make sure it was completely extinguished.

The blaze was around 200 feet higher than the lake, which presented some problems, Bellefleur adds. Because it’s tricky getting water up that kind of elevation, he says crews “needed multiple pumps to get a good supply of water from the lake.”