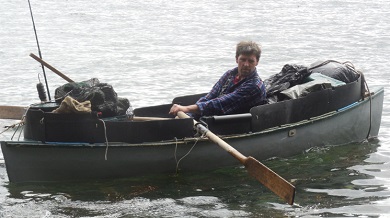 Police on Quadra Island are seeking the public’s help to find a missing man who hasn’t been seen since mid-December.

Quadra Island RCMP says he floated off in a 14-foot skiff rowboat before heading to an unknown location near the Pryce Channel, Deer Passage, or Toba Inlet.

The detachment was first made aware of Zuk’s disappearance just before 10:00 am on May 2nd.

Police say West Coast Marine Unit was called to assist and made patrols between Wednesday, May 5th, and Monday, May 10th; however, they note “the results were unsuccessful.”

A person matching Zuk’s description was spotted around three weeks ago in the Toba Inlet, so RCMP are now asking anyone who may frequent the inlet or nearby areas to reach out with any information.

They say Zuk has medical issues, and that his family is very concerned for his well-being. He’s described as white with a medium build, hazel eyes, and brown wavy hair. He stands at six-foot-two and weighs around 181 pounds.