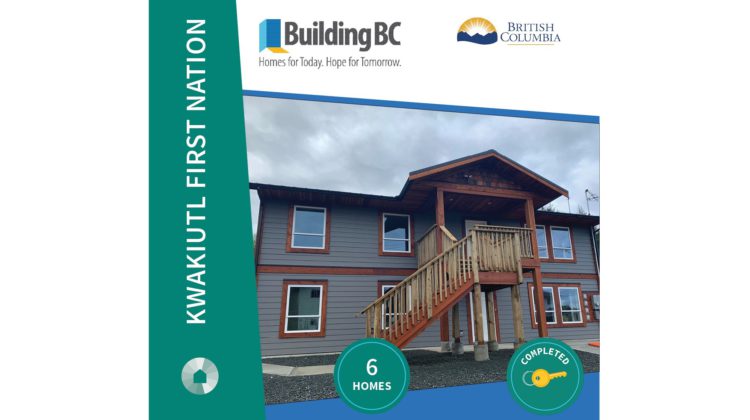 Photo supplied by: BC Housing/Facebook

Residents started moving in earlier this month – all thanks to a partnership with the Province, through BC Housing and the First Nation.

The two-bedroom homes are next to administrative, cultural, and health facilities, ensuring Elders have easy access to community services. The Province says monthly rents will range from $500 for a two-bedroom unit to $700 for a three-bedroom unit.

The Province provided $1.5 million for the project through the Building BC: Indigenous Housing Fund – a 10-year, $550-million investment to build and operate 1,750 new homes, both on and off reserve.

“On behalf of the Kwakiutl Band Council and Nation, we would like to thank BC Housing for their financial contribution and making it possible to build affordable housing in our community,” says Chief Ross Hunt Jr.

He’s hoping to collaborate with BC Housing again in the near future, and says the investment made it possible for families to reunite and move home.

The Kwakiutl First Nation provided the land, and they’ll also own and manage the homes. It’s all great news for North Island MLA Michele Babchuk, who notes these homes were “urgently needed.”

“I would like to thank the Nation for working with us to make this project a reality,” she adds. “I look forward to working together in the future, strengthening our relationship in support of the people we all serve.”