BC Hydro warns of high flows along Puntledge River this weekend 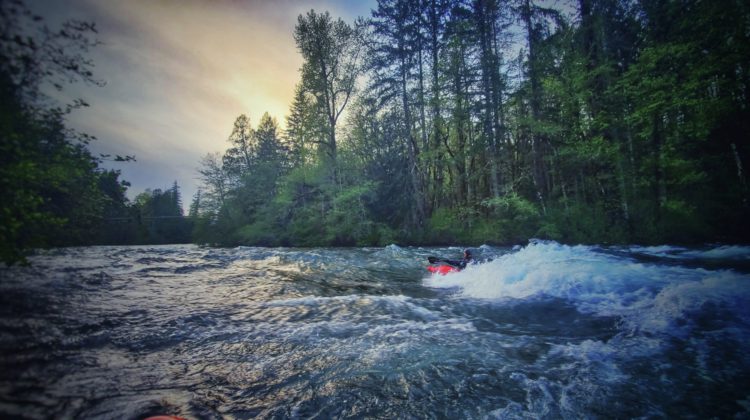 There will be ideal expert kayaking conditions on the Puntledge River this weekend. (Photo by David Prothero)

BC Hydro is issuing a safety advisory for people to stay away from the Puntledge River from Friday to Monday.

This comes with a forecasted storm expected to bring around 65 mm of rain to the upper Puntledge River watershed.

The predicted rainfall, combined with the Comox Lake Reservoir level approaching full, means BC Hydro will increase river flows by over three times the normal rate on Thursday night through early Tuesday morning.

Temporary danger safety signage will be placed along the river system.

You should not be swimming in the river, such as at Nymph Falls or Barber’s Hole, with the strong and dangerous river flows.

BC Hydro has been providing about 33 cubic metres per second (m3/s) from the Comox Dam down the Puntledge River.

The powerhouse has been running at full capacity.

The water inflows into the reservoir, based on BC Hydro’s seven day forecast, looks to well exceed 100 m3/s on Thursday and Friday, and then remain fairly high, though reducing into the weekend.

BC Hydro spokesperson Stephen Watson says the rainfall “has remained lower than normal the last few months, and with the rainfall to date for the month of May being at 78 percent of normal, the forecasted storm will certainly help.”

The Comox Lake Reservoir is currently at 134.5 metres and rising.

Watson says water free spills over the spillway section of the dam at 135.33 metres.

“To control the reservoir, and hold it near the 135 metre range, we will increase the discharge from the dam to about 110 m3/s on Thursday night and into Saturday night, then reduce flows to about 90 m3/s Sunday morning through Monday night,” he explained.

“We may adjust flows up or down depending on actual inflows. The river flow rate may then be reduced down to about 33 m3/s on Tuesday morning.”

Watson says the 110 m3/s followed by the 90 m3/s flow rate from the dam “are ideal expert kayak flows for kayakers within the Vancouver Island region who will be able to take advantage of the recreational conditions.”

However, only expert kayakers should be entering the river.

Depending on the forecast, there may be a chance of further higher water releases from the Comox Dam.

BC Hydro will provide an operational update if another water release is needed.