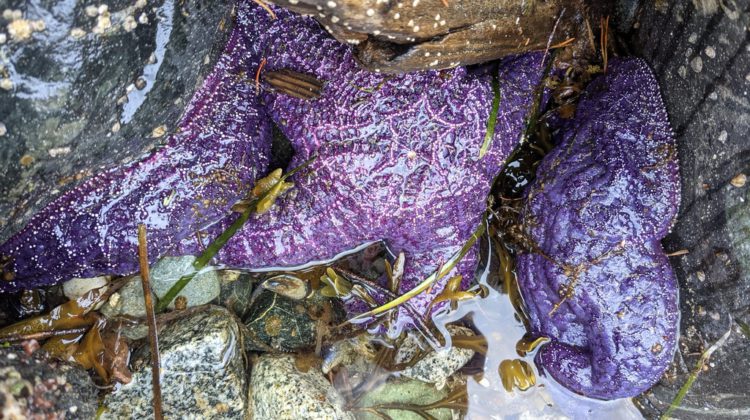 The Hakai Institute and the Friends of Cortes Island Society (FOCI) are calling on locals to document sea stars around Quadra Island, Cortes Island, and the rest of the Discovery Islands.

“If you love keeping your eyes peeled for cool critters while walking along shorelines, this is the project for you,” they say.

Researchers at Hakai note they’re starting a new project to monitor sea stars in the region. It’s all in an effort to learn more about the extent of sea star wasting, and how well sea stars are recovering.

“The more eyes we can get on the ground (or in the water) the better,” they say. “When you see sea stars of any species – healthy or diseased – while out exploring the shore, simply snap a few photos and share your observations on iNaturalist. Your observations will automatically be captured by this project.”

As of today (Friday), 402 observations have been recorded in the Discovery Islands – totalling ten different species – through iNaturalist.ca, Canada’s gateway to a global species data-sharing community.

However, you don’t need to know which species you’ve found: “the iNaturalist AI system and its community of naturalists will help you identify your many-armed finds,” they add.

To get started with iNaturalist, you’re encouraged to visit the ‘Getting Started Guide’ and check out Hakai’s video introduction to iNaturalist.

“Sea star wasting affects the tissues of sea stars and is ultimately fatal. The current sea star wasting epidemic started in 2013, and caused a widespread and unprecedented die-off of sea stars from Alaska to California. It continues to persist at low levels throughout the region. Populations of some species show signs of recovery in some places, while others are still depleted, or even extirpated. Researchers are now exploring big questions about the persistence of sea star wasting and how well populations are recovering throughout British Columbia and beyond.”

For more info, check out Hakai’s primer on the basics of sea star wasting. To learn more about recent research, or to see the full list of affected species, click here.