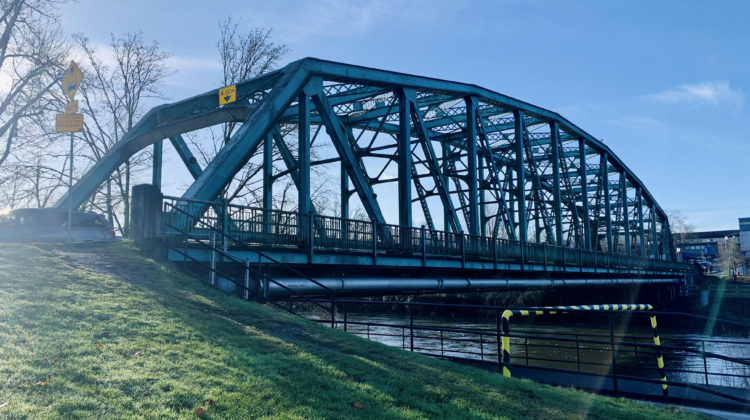 A dedicated pedestrian corridor is coming to the 5th Street Bridge.

It’s part of the 5th Street Bridge Project and will be installed next week.

The corridor will be 1.5 metres wide, or the width of a standard sidewalk, for the full length of the bridge.

The city says the corridor may shift during future phases of the work.

During the week, pedestrian access across the bridge will shift from the current sidewalk to a dedicated pedestrian corridor on the south side of the bridge deck.

Cyclists may dismount and walk their bikes down this corridor, or can follow the detour route in the priority vehicle lane and ride across the bridge. 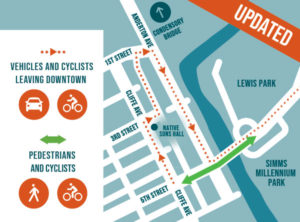 5th Street map supplied by the City of Courtenay

The corridor will replace the previously announced temporary scaffold walkways.

The city decided this option isn’t feasible because of the intricacies of the scaffold system.

Mayor Bob Wells said that maintaining safe access for pedestrians is an essential component of the project.

“Using the bridge deck for pedestrians was in the original transportation strategy for this project,” Wells said.

“The City’s top priority during planning and construction has been keeping this bridge crossing open for commuters. While this is an active construction zone, we know the 5th Street Bridge is an integral link in our transportation network and a key gateway to downtown Courtenay, so we’re doing everything we can to keep as many people moving across as possible.”

In addition, scaffolding installation has now progressed to the top of the bridge, with clearance reduced to 3.6 metres. All overheight vehicles must now detour via alternate routes.

“Anyone with a camper or other tall vehicle must ensure they are within the 3.6 metre overhead clearance. Any vehicle above that height can no longer use the 5th Street Bridge and must use a different route until the scaffolding is removed,” Wells said.

“We’re very mindful of the many crew members working within this scaffolding, and protecting their health and safety is paramount.”

The protective wrap around the bridge scaffolding will be installed by mid-June. That’s also when the removal of the existing lead paint can safely begin.

Meanwhile, you’re asked to remain mindful of directional signage, and other bridge users during this transition.

$700,000 was included in the project budget to keep the bridge open to all modes of traffic during construction.

The city says the project will preserve and extend the life of the 60-year-old bridge well into the future.

Construction started in mid-April and is expected to take six months to complete.