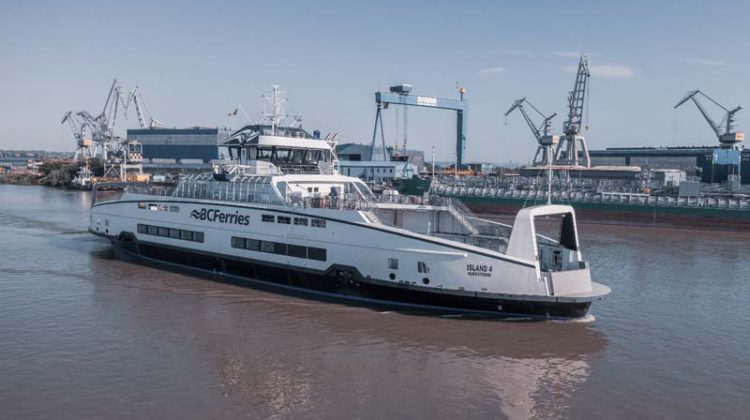 Another new Island Class ferry is sailing its way to British Columbia.

Following the departure of BC Ferries’ third Island Class ferry in May, a fourth one has now begun the journey from Damen Shipyards Galati in Romania.

Together with the third Island Class ferry, they’ll provide two-ship service on the Campbell River – Quadra Island Route starting in 2022. The ships will replace the existing Powell River Queen.

BC Ferries says hybrid diesel-electric ferries can carry around 47 vehicles, and up to 400 passengers and crew. They also allow for existing diesel-fuel ferries to retire. This comes as welcome news to BC Ferries, as it aims to be more environmentally responsible.

The yet-to-be-named ferry will make the transatlantic voyage under its own power in about two months, but that all depends on the weather. The over 10,000 nautical mile journey will include two stops for refuelling, before arriving at Point Hope Maritime in Victoria for final inspections.

BC Ferries says it’ll take ownership after these inspections. The ferry will then be named and christened before crew training, ship familiarization, and dock fits.

This ferry is the fourth in a series of six new Island Class ferries joining the BC Ferries fleet. The third Island Class ferry is still on its way to B.C. and is currently mid-Atlantic, northwest of the Cape Verde Islands. The first two entered service on the Powell River – Texada Island route and the Port McNeill – Alert Bay – Sointula Island route last year.

To follow the ferry’s journey and track its progress including course, position, and speed, BC Ferries encourages you to visit vesselfinder.com – and look for the ship under the temporary name, ‘Island 4’.