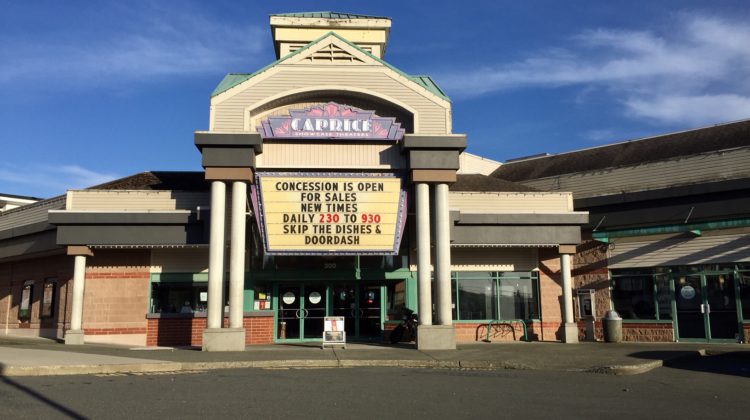 Landmark Cinemas is banking on people being allowed to go to the movies again.

The company is so confident, it’s selling tickets ahead of Tuesday, when the province will potentially move into Step 2 of its restart plan.

Our theatres across BC, AB, and SK are back! 🎉

CEO Bill Walker says all signs point to Landmark movie screens – including ones in Nanaimo, Courtenay, and Campbell River – lighting up again next week.

“When we look at the phasing plan of the province, and we did get confirmation through our industry association that it was defined as 50 people per auditorium, at which point we’re comfortable with moving ahead with an opening,” Walker said, “and from all metrics in the province it seems like moving to that second stage is where we’re going, so we were comfortable with putting tickets on sale.”

A spokesperson with the Ministry of Jobs, Economic Recovery and Innovation told us that we’re on track for moving into Step 2, with 74 percent of people over 18 having received a first dose of the vaccine.

They added, however, that there is no guarantee, and that they continue to monitor other indicators, such as case counts, hospitalizations and critical care admissions.

“We will continue to monitor vaccination rates and other indicators to ensure it is safe to move into Step 2,” the ministry added.

Meanwhile, Landmark says most of its B.C. theatres are expected to open on Tuesday, but Landmark’s Encore theatre in West Kelowna will remain closed temporarily and its theatre in Port Alberni will reopen later this month.

Walker says once open, Landmark Cinemas will have the same COVID guidelines in place, as they did back before theatres closed in November.

“We have our reserved seat maps that we adjust to 50 (people) and frankly in B.C.  it’s been 50 during all of our other previous open periods, so we get to move forward with that, maintaining physical distance between every individual party that books tickets, and then spacing the showtimes out a little bit, so that we don’t have a crush of people from multiple auditoriums in the lobby at any given time.”

He noted that once you’re in your seat and have your popcorn and drink, it’s safe to take your mask off and “enjoy the story on the big screen.”

Judging from the first day of online ticket sales, when more than 1,000 tickets were sold province-wide,  there’s a hunger to return to movie theatres in B.C. again.

Walker said the die-hards who can’t wait to go to the movies are a key part of their customer base, but he hopes others will feel safe enough to go back to the movies again.

“Just to get people re-engaged and there’s a reason to go to the movies, and there’s something for me on the big screen and once you’re there, you feel safe, you enjoy it, and you get (to see previews of) some of the upcoming movies that are coming in the months thereafter.”

As for envisioning a day of packed movie theatres again, Walker says they don’t see this “as a bandaid that is just going to get ripped off overnight.”

“I think there’s a phasing-in (process) where collectively as a society, we have to go through a process of unwinding some of this and just getting reacquainted with being in close proximity to strangers,” he added.

“That’s been a part of our human experience for a long, long time and I think that it will come back. I think it will take some time both from a restriction perspective and then from consumer sentiment.”

Coming to theatres are A Quiet Place Part II, In the Heights, Peter Rabbit 2: The Runaway, Disney’s Cruella, Demon Slayer the Movie: Mugen Train, Spirit Untamed, Hitman’s Wife’s Bodyguard, and The Conjuring: The Devil Made Me Do It.

You can reserve tickets here landmarkcinemas.com.