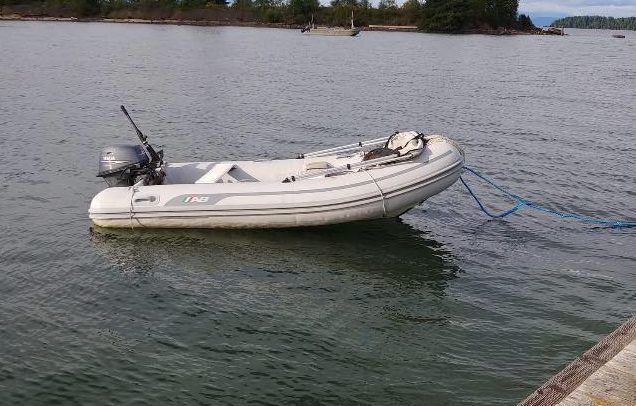 A stolen dinghy is back with its owners, thanks to the keen eye of a total stranger.

Rosi said whoever stole the dinghy went to great lengths to pry it loose: “It had a cable with a big padlock, and it had a spring line tied on it rather elaborately, and all of that had been cut, and one of the patches that had the locks on it, actually they cut the patch.”

The dinghy wasn’t missing for long.

Rosi says Bruce McKee spotted it as he drove by at the Union Bay boat launch and then gave them a call.

It was loosely attached and Rosi said McKee took the time to re-tie it ‘nice and snug.’

She added that McKee and others in the community have restored her faith in mankind.

She added that the RCMP did a thorough job of investigating “which I know they don’t always get time for in their job, which is getting busier everyday, unfortunately.”

Rosi says when push comes to shove, “the community really comes together to help somebody out, and I believe that more than ever.”

This is a case of good karma coming back.

This dinghy was once deployed to help a pilot out of the Courtenay River after his plane crashed in the marina, helped the RCMP rescue a couple of kids that got stranded in the shoals on the dike when the tide came in, and has been used to haul many bags of garbage and cans out of the river.