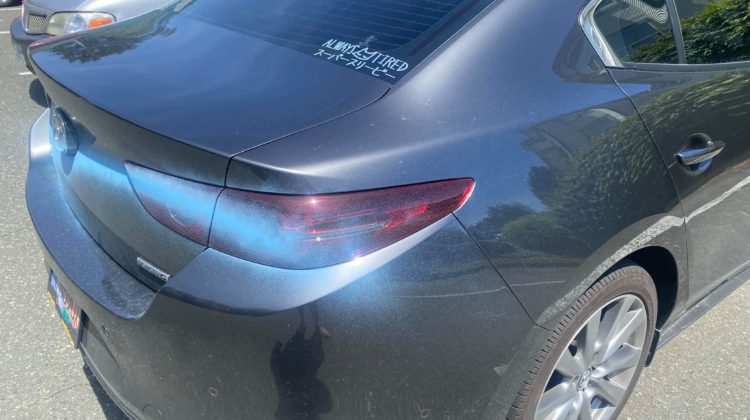 Sunday morning left Jacob Kennedy feeling a little blue, after he awoke to find his car covered in spray paint.

The Campbell Riverite says a friend of his who lives down the street posted to Facebook that same morning (June 20th), claiming his orange Subaru was vandalized sometime the night before. Kennedy’s intuition then led him to step outside his Rockland Road apartment to check on his car.

“So I was thinking about it and I was like, okay, he lives really close to me. And I went out and checked mine and my girlfriend’s cars, and sure enough, mine had blue paint all over the back,” Kennedy tells My Campbell River Now.

Upon the discovery, Kennedy says he was mad. He doesn’t know what would motivate someone to damage someone else’s property, finding it “kind of ridiculous.”

“It baffles me that people would actually think to do this,” Kennedy explains. “It was easy to come off this time, but if it was harder and some of the cars required resprays, not everyone can afford to do that. It’s disappointing to me.”

Kennedy says he quickly called the police and made a report. However, he and his friend weren’t the only targets.

“The investigating officers ended up locating 17 different vehicles on Springbok Road, from Gazelle Road up to Robron Road that had been spray-painted over the course of the night with a blue/grey forestry marking paint,” Campbell River RCMP Cst. Maury Tyre says.

At this time, Tyre says police are seeking help from the public. They’re hoping anyone who was in the Rockland area between 1:00 am and 8:00 am yesterday will come forward.

“We are asking that anyone in the neighbourhood with video cameras check their footage from that night and if they have anything suspicious in their footage they can call the local police detachment immediately,” Tyre adds. “Also, if someone has noticed someone that likely isn’t exposed to aerosol paints in their work or art life and they have some on their clothes or hands, that would be a worthwhile tip for sure.”