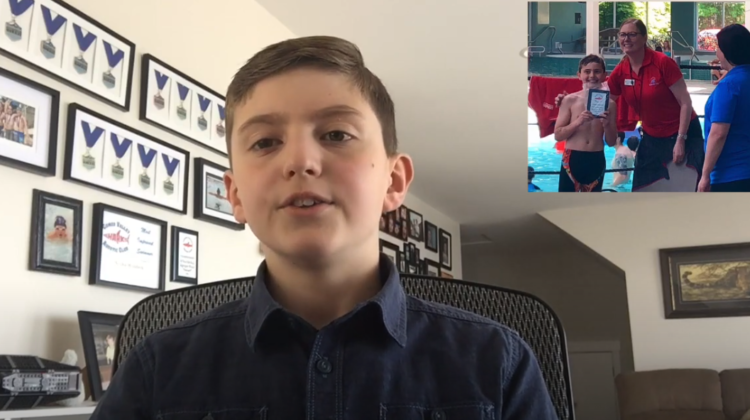 With files from Comox Valley Schools

Sasha Woldnick may be fairly new to French, but you wouldn’t know it by his skills in a virtual public speaking contest.

Woldnick has only been learning French for the past nine months when he enrolled in the Late French Immersion program at the start of his Grade 6 year.

With the encouragement of his teacher, Mme. Thea Black, he  entered the contest at the classroom level and was selected to represent his class in a district Zoom competition.

His performance earned him the chance to submit a persuasive speech via video recording for the national level competition.

Each year, the district hosts a Concours event for French Immersion students at the elementary and secondary level.

Due to COVID-19 pandemic restrictions, a virtual event for district students was held March 17th, after a hiatus in 2020 when in-class instruction was suspended.

Like many school events and competitions, Concours was delivered in a digital format to allow the annual contest to continue.

The goal of the language contest is to offer a valuable opportunity for students to practise French on any topic ranging from a favourite hobby to views on current events.

Woldnick chose to speak about what he is most passionate about: competitive swimming.

As a member of the Sharks swim team, Woldnick shared stories of the social interaction swimming offers and the awards he has won competing throughout Vancouver Island.

He already has his sights set on joining the swim team and studying at University of Victoria.

“My speech was on swimming and why it is the best sport in the world because I’m a swimmer and I really love to swim,” explained Woldnick. “You can make a lot of friends through swimming and build life-long relationships. It’s a social sport.”

Learning languages has been influenced by his upbringing in a dual English and Ukrainian language household.

Along with his teacher, Sasha’s mom gave him much encouragement to learn a third language.

“I really like to thank my mom because she pushed me a lot and if not [for] her, I wouldn’t have done this program,” expressed Woldnick. “I’m not fluent yet, but I’ve learned a lot of French.”

Judges use a rubric to score individual speeches on vocal expression, coherence of presentation language proficiency, and delivery.

He received notice of his results early June, more than two months after his video submission and will receive a cash prize later this year.

The Concours d’art oratoire is Canada’s largest annual French public-speaking competition and is open to students in every province and territory in a wide range of age/grade categories and French abilities.

The contest is organized by Canadian Parents for French (CPF) CPF, a grassroots organization that began more than 40 years ago to support bilingualism and promote opportunities to learn and use French.