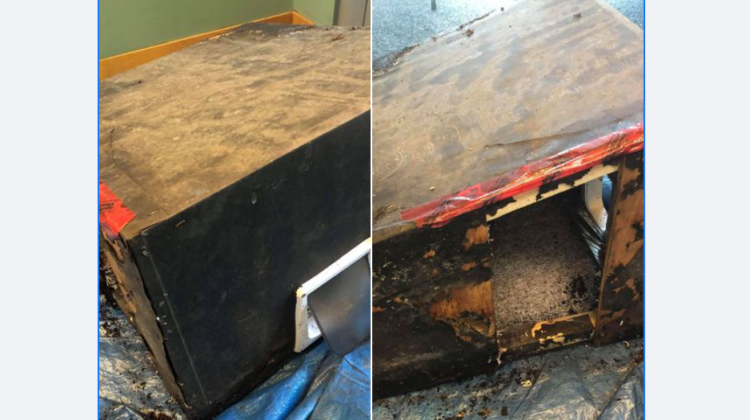 The mystery of the decomposing box left outside the Comox Valley SPCA branch continues.

It was dumped at the shelter door Monday night and it looks as though there may have been an animal inside.

The box was tightly wrapped and stapled closed with a tarp. On one side was an open hole, and on the other was a cat door.

Branch manager, Emily Priestley, says this isn’t the first time someone has made an unscheduled drop-off at the branch.

“From time to time, we do have animals dumped, unfortunately in all sorts of containers and situations, so when we do find something like that at the front door, or anywhere really, the first things we do as animals rescuers is, our heart rate starts to go up because we think that there’s an animal inside.”

Priestley says staff opened the box and found there was nothing inside, but now they’re worried that whatever may have been in there, had escaped.

“Obviously we don’t want animals dumped anywhere, because they could get loose or they would be left without care which we would never want to see.”

She says this is a reminder that if you want to surrender an animal, you have to arrange a drop-off during SPCA hours: “We do have appointments that we can book into for drop-offs. That way we can make sure we have time and staff available to take care of the animal, to take them down to the vet if they need to go to the vet, get them settled in for the night, that sort of thing.”

As well, you have to arrange ahead of time because the shelter may not have room, in which case staff will redirect you to a different location.

She points out that after-hours drop off is considered abandonment, which is illegal.

Anyone who knows anything about this item, and if there was an animal left in it, is asked to call or message the shelter.

Otherwise, contact the branch at (250) 339-7722 before leaving any donations, as they cannot use items like this due to health and safety reasons for their animals.