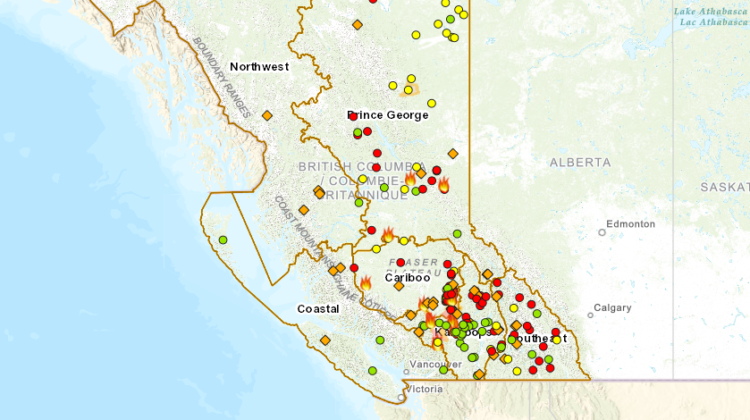 While the rest of the province burns, the Coastal Fire Centre remains relatively wildfire free.

As of just before 3:00pm, there were 199 active wildfires burning across B.C., with 46 new ones over the past two days.

The Coastal region, which includes Vancouver Island and the Sunshine Coast, had just seven wildfires.

Among them are the 2.5 hectare Daniels River fire northwest of Powell River that’s now considered under control, and a small, lightning-caused fire on the North Island between Woss and Port Alice, that was discovered yesterday. 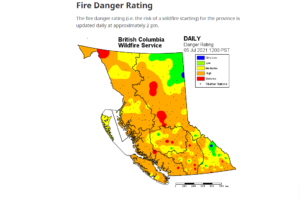 There is also one in Haida Gwaii, two in Bella Coola, and one near Port Alberni.

Information officer, Donna MacPherson, says the lightning strikes that have plagued other parts of BC have held off on the coast, which has helped keep our wildfire situation in check.

“The big difference between the coast and the interior is that we haven’t had the lightning strikes that they’ve had in the last few days,” MacPherson said. “We’ve had lightning and it’s been in the Bella Coola valley, we are seeing a potential for more in the next couple of days but certainly we’re not seeing the volume that they’ve had.”

She added that people seem to be getting the message that a province-wide open fire and campfire ban is in place.

“We’ve been pleasantly surprised with how we haven’t had many human-caused fires so far this year,” she said. “Whatever people are doing this year, we’d like them to keep it up, because turn us away from the lightning-caused fires that happen. I want to remind everyone that all open fires are prohibited. That’s anything from a small campfire up to a big one.”

They are allowing outdoors stoves and portable campfire apparatus fueled by propane that have CSA or ULC upgrades.

As for the fire danger rating, most of the coast and Vancouver Island is coloured orange, or high fire risk. This means forest fuels are very dry and the fire risk is serious.

MacPherson says that it doesn’t take very much to get a fire going. “If you’re a smoker, please take along a water bottle and use that as an ashtray, if you’re taking vehicles out into the forest, please stay in the dirt if you will. If you go through weeds, you’re going to get that debris caught up underneath your vehicle and it hits the exhaust and it starts a fire behind you.”

“Right now would be a really good time for people to use a shooting range because they have dampening systems to make sure that the heat caused by the shooting doesn’t actually start a fire,” MacPherson added.

“If you are shooting out in the forest, we’re asking you to be careful where you do it. Don’t do it where there’s a lot of plant debris. We’d rather you do it in a gravel pit. Make sure you stay around afterwards and deal with any fires that might start and take along some water and a shovel and make sure you are ready to deal with it if you’ve started one. If a bullet ricochets off a rock it creates a spark. The casings themselves are hot, the bullets are hot, so all of these things can contribute to a wildfire.”

With the fire situation as it is, the coast continues to send more resources to the B.C. Interior. The Kamloops Fire Centre is dealing with 65 active fires.

MacPherson said the Coastal Fire Centre has sent around 100 people east to battle those blazes.

“We are very careful to retain enough (people) to be able to handle the coastal fires but we were able to release some people to go help with those very dire conditions in the Interior,” she explained. “So we’ve sent four unit crews, and a unit crew is of 20 people, one from Port Alberni, two from the Fraser zone and one from the Pemberton zone. We’ve also sent one initial attack crew, as well.”