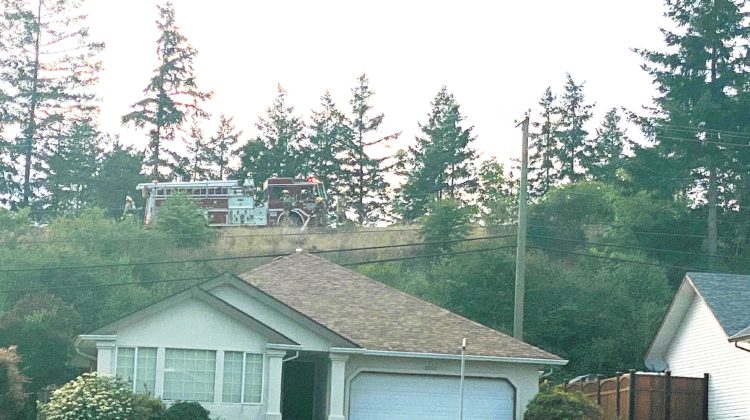 Whatever sparked a series of grass fires along the Ryan Road hill remains a mystery.

“When we arrived on scene we found five fires spread out over about 75 to 100 metres up the hill,” Bardonnex said. “And on arrival there were some civilians attempting to put the fires out, they’ve stopped their cars and were using fire extinguishers and whatnot on them.”

One of them was Zoey Carvery, who said she saw “a bunch of smoke” as she and her boyfriend were driving down Ryan hill.

“I sped up my vehicle to get closer, instantly pulled over, I told Ben, who is a good of ours to grab the water, and opened the doors, put it in park, and ran across the road, and just started doing what we could,” she said.

“As we were running across the road I ended up running beside a nice young man who passed me a huge case of water, so I grabbed what I could and then I passed it on to the next person… It was a crazy amount of teamwork from everybody.”

Carvery said in just minutes,  the fire had spread in the tall, dry grass. She added that the summer flats she was wearing ended up melting from the heat.

Witnesses tell us the fires were started by a cigarette, but the fire department says the cause has not been confirmed.

One Good Samaritan said the fire had spread roughly 100 feet over the length of the road and about 30 to 40 feet down the side of the hill on the east side.

In this case a house was only another 50 feet away.

While Bardonnex applauded people’s efforts in trying to put the fires out, he stressed that safety should always come first.

“Well, we certainly appreciate it but we don’t want the civilian population to endanger themselves,” he added.

“In some cases they’re wearing shorts or flip flops or whatnot, and could easily get burned. So we definitely appreciate the effort but we’re more concerned about their safety.”