Drought worsens, slim chance of a few raindrops by end of week 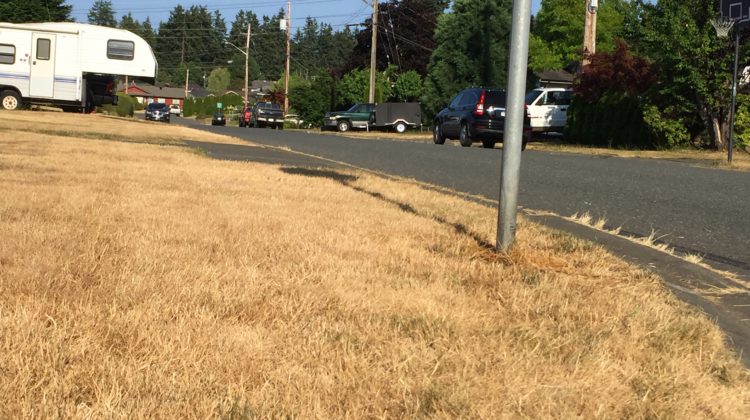 Most lawns in Campbell River's Ocean Grove neighbourhood are now yellow due to a lack of rainfall. (Troy Landreville photo, Vista Radio)

There’s a slim chance we could see a few raindrops on Friday.

Environment Canada meteorologist, Bobby Sekhon, says a system is expected to make its way to the North Island.

“The most likely candidate to get rain out of that is going to really be Port Hardy, Vancouver Island. Chance of showers for the rest of the island and east Vancouver Island but I wouldn’t expect any more than one or two millimetres, really.”

We haven’t seen a drop of rain since mid-June across eastern Vancouver Island, which is now in Level 4 drought conditions.

Sekhon says that, climatologically, we’re in the driest time of the year spanning from mid-July into August.

“We only expect about 27 mm of precipitation in July but we have gotten nothing at all since mid-June, so it’s supposed to be a dry time of year but it’s quite exceptionally dry this year.”

Places like Comox and Campbell River are coming off a drier than usual June, as well.

Comox had just over half the normal amount of precipitation for the month.

Twenty-three mm of rain fell last month where normally, it gets 43 mm in June.

Campbell River did a little bit better, getting 51 mm compared to the normal 63 mm.

“However, these amounts are quite small considering that the spring was drier than average,” he said. “It’s really been several months of dry weather.”