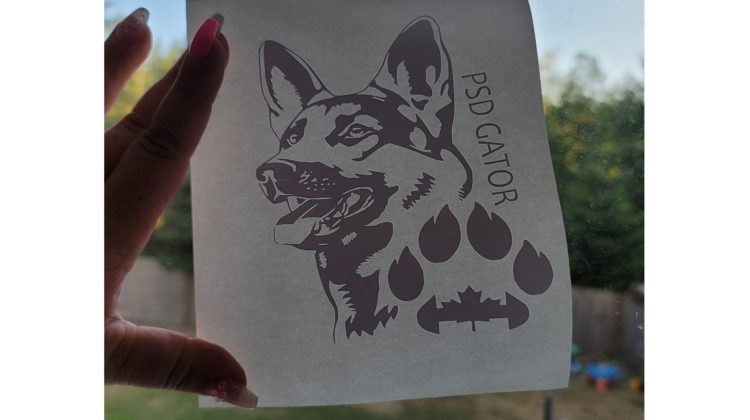 As the Campbell River continues to reel from last week’s tragic events in Willow Point, a decal project has been launched in memory of Gator (Photo: Jessica Calado/Facebook)

A Campbell Riverite has launched a unique decal project in memory of a fallen police service dog.

Jessica Calado, a local dog groomer and animal lover, says the death of Gator shocked not only her but the entire community.

“The situation all around isn’t good,” Calado tells My Campbell River Now. “The officer being injured and the canine passing away hit my heart.”

Last Thursday (July 8th), Gator was killed in the line of duty outside the Willow Point Tim Hortons. He was stabbed to death and his handler was stabbed as well. The incident ended in an officer-involved shooting.

“It’s a tragic situation, the whole thing all around. I don’t want to go one side more than the other, especially with everything that’s going on in town,” Calado says.

“But the situation with Gator definitely hit me hard, so that’s why I wanted to do something for him.”

Calado says she’s now making Gator decals from her silhouette machine. It’s a pretty easy process, she notes. It takes about 5 to 10 minutes to make each decal.

“I was playing with a design on my phone and I was going to print them out for my girlfriend and I,” Calado says.

She continues, “I printed one out and I really liked how it turned out. So I took to Facebook and asked if anyone wanted to have a couple. I kinda figured maybe 10 or 15 people would want one. And the next thing I know, there’s about 100 people who want one.”

So far, Calado finds the feedback has been nothing but positive: “They’re amazed at how they turned out, they love it.”

The decals come in a variety of colours. And because they’re made from an adhesive, they’ll stick to pretty much anything.

But this isn’t a business for Calado, it’s a hobby. She says all funds collected will go to Ned’s Wish, in honour of Gator. The nonprofit is dedicated to enhancing the quality of life for retired police dogs by providing financial support for their medical well-being.

“It’s 100 per cent by donation. There’s no amount too little, no amount too much,” Calado explains. “I made it that way because I know that some people can’t afford a lot, and I wanted to be able to get those people a decal without them being financially hurt by getting one. So it is by whatever the individual can afford.”

Those interested in a Gator decal of their own can reach out to Calado personally through her Facebook profile. She says the pickup location and donation method will then be arranged.