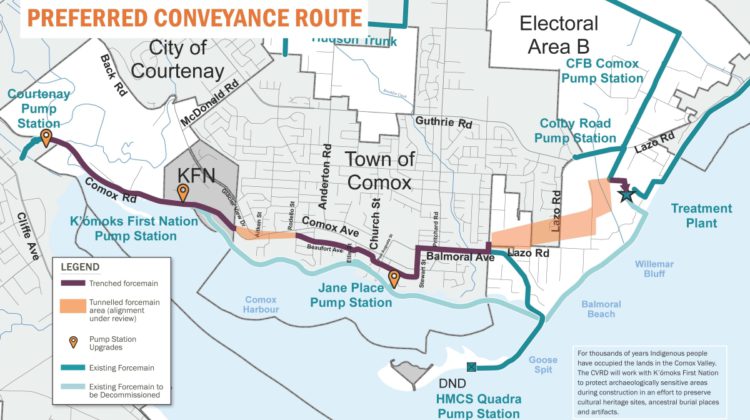 Caption: Preliminary map of preferred sewer route, which will be finalized during the detailed design phase of the project. (Supplied by the Comox Valley Regional District)

A giant step forward for plans to replace the at-risk sewage forcemain from Willemar Bluffs and protect the waters of Baynes Sound.

The success of an Alternative Approval Process, or AAP, for the Comox Valley Sewer System Conveyance Project, means final planning can now get underway.

The AAP – which sought approval for $52-million in borrowing for construction of a new conveyance line (pipes and pump stations) – received 17 elector response forms in opposition.

That’s far less than the 3,074 (10 per cent of eligible electors) threshold that would have prevented the borrowing.

“The need to decommission the at-risk forcemain at Willemar Bluffs remains an urgent priority and we’re glad to know that our extensive planning process has resulted in a path forward supported by the vast majority of the community,” said Doug Hillian, Chair of the Comox Valley Sewage Commission.

“We are eager to see this critical work proceed.”

The project is the next step in a sewer upgrade planning process that started in 2018.

The Comox Valley Sewer Service Liquid Waste Management Plan was developed over three years, with public engagement at each stage, and the active participation of a public advisory committee.

In February, the sewage commission approved the preferred conveyance route for the LWMP.

The route, which currently runs along the Comox Bay foreshore around Willemar Bluffs to the treatment plant, will be located inland under roadways and through tunnels.

In order to move forward to construction as soon as possible, the decision was made to proceed with an AAP for borrowing on this portion of the project, rather than wait for provincial approval of the LWMP – not expected until 2024.

The project team is finalizing the route alignment for the new pipe, with a focus on minimizing costs and impacts to residents, businesses and groundwater.

The project scope and final optimum routing will be finalized in the fall/winter and will be presented to the community once it’s completed.

Information on the project moving forward can be found at www.connectcvrd.ca/conveyanceproject.