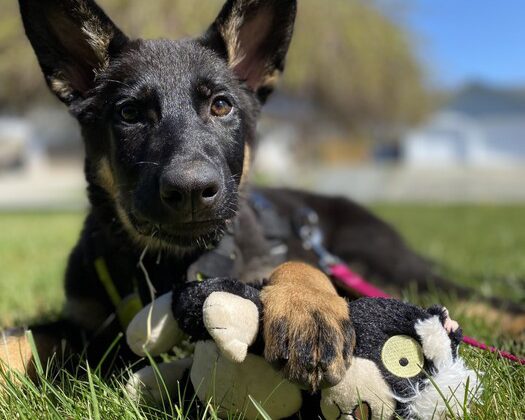 Raven is A 5 month old female German Shepherd up for adoption at the Nanaimo & District Branch in Nanaimo. (Supplied by the BC SPCA)

Here’s a chance to add a furry addition to your family.

The BC SPCA is holding a half-price adoption promotion to free up space in its locations, for emergency boarding of animals impacted by the  wildfires that are raging across the province.

General manager of communications Lorie Chortyk said their goal is to create capacity for as many animals needing free temporary shelter as possible, while at the same time finding wonderful homes for the animals currently in the BC SPCA’s care.

The promotion, which takes place July 20th to 30th, is presented by Hill’s Pet Nutrition.

The SPCA is offering 50 percent off adoption fees of all companion animals.

“We encourage anyone who has been thinking about adopting a pet to take advantage of this promotion. You will not only be providing a loving home for a deserving animal in our care, but it will also help the BC SPCA’s emergency response for animals in crisis,” Chortyk said.

The BC SPCA has provided free emergency boarding for more than 80 animals since the fires began.

They’re being cared for at its shelters and at a BC SPCA Animal Evacuation Centre set up in Kamloops on July 7th.

“We are extremely grateful to Hill’s for their ongoing and generous support of vulnerable animals in B.C.,” says Chortyk.

“In addition to providing food for animals in our facilities throughout the year, they have sent pallets of food to Kamloops to help us care for animals displaced by the wildfires. Having a consistent, quality diet for the animals is so important to their welfare.”

If you are interested in adopting a new furry best friend, visit the BC SPCA website at here. spca.bc.ca/adopt.

View animals currently looking for loving homes and follow the online instructions for the adoption process.