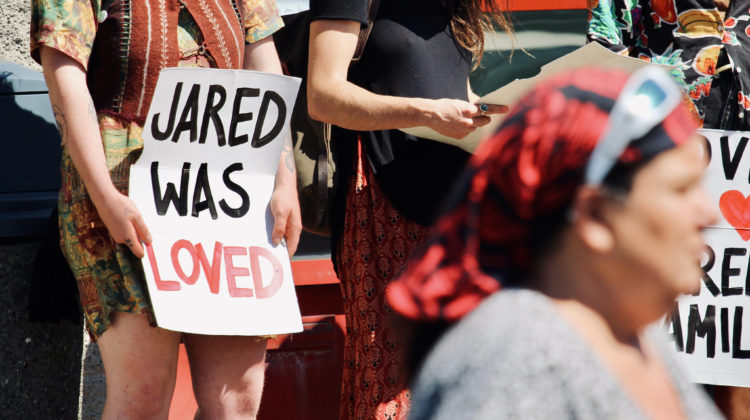 A Tuesday procession for Jared Lowndes drew a large crowd, as people from Campbell River and beyond gathered to remember his life.

At 11:30 this morning, friends, family and supporters met along the Island Highway in downtown to reiterate their call for ‘Justice for Jared’.

“I’m here to support the family and to march for justice for the Indigenous man who was killed by police,” Nathan Thomas Peter told My Campbell River Now. “I’m impressed, I was worried that it wouldn’t be as large. I’m really happy with what is happening here.”

Lowndes, of the Wet’suwet’en Nation’s Laksilyu (Small Frog) House and a 38-year-old father of two daughters, was killed on July 8th.

After fleeing a traffic stop, Lowndes was cornered by the Campbell River RCMP outside the Willow Point Tim Hortons. The incident escalated, and he fatally stabbed police service dog Gator and injured a police officer. Lowndes was then shot dead by police.

“We are here to pick up Jared Lowndes’ ashes,” said aunt Fay Blaney. “We do have a lot of support. We’re very pleased with the amount of support that we have here.”

She continued, “We do have people from the Comox Valley community, and we have people from Quadra and Cortes, and other parts of the Island. I believe there are people here from Duncan. And Vancouver, I can’t forget Vancouver,” Blaney added. “That’s where he grew up.” As Lowndes’ brother walked out of Island Funeral Services with Lowndes’ ashes, Randy Geddes, a friend of the family for over 25-years, let out the ‘Four-Warrior Screams’.

“It’s for the sacrifice of his life that he gave,” Geddes said. “And then I sang the ‘Spirit Song’, because that’s where he is and that’s what he is now.”

“My son is gone,” she cried. “I can’t see him, I can never see his face again. But he’s with me. I’ll take him with me in everything that I do, every breath that I take, I’ll bring my boy with me.”

Following the ceremony, the crowd made its way to Strathcona Gardens to rally out front of the local police station. They then stopped by Lowndes’ memorial outside the Tim Hortons, with one last stop at the Homalco Cultural Centre.

Last week, Blaney told us the memorial had been ‘defaced’ and ‘desecrated’ a handful of times.

“It’s been going on since it happened,” she said. “Every day, we come back and it’s destroyed. The first day, they took everything down and threw it off to the side and put up Gator posters for the dog.”

Present at the procession was Homalco First Nation Chief Darren Blaney and Lydia Hwitsum with the First Nations Leadership Council.

The incident left the Council ‘outraged’, calling for justice, accountability, an inquest, and a higher level of oversight in the aftermath of Lowndes’ death. They say there was no attempt at de-escalation from the RCMP, in turn leaving a community divided with racist and hateful sentiments.

“We mourn the loss of another cherished and critical Indigenous life that was needlessly taken at the all too ready hands of police,” said Grand Chief Stewart Phillip, President of the Union of BC Indian Chiefs.

“We join Jared’s family in absolutely condemning the lethal force used by the police and we support their calls for an Indigenous investigator and civilian monitor to be appointed by the Independent Investigations Office (IIO).”

The National Police Foundation (NPF) spoke out last week, extending condolences to those close to Lowndes, with foundation President Brian Sauvé suggesting the man’s own actions led to his death. Policing in Canada is highly regulated, Sauvé said, adding the NPF is in full support of the IIO’s ongoing investigation into the incident.