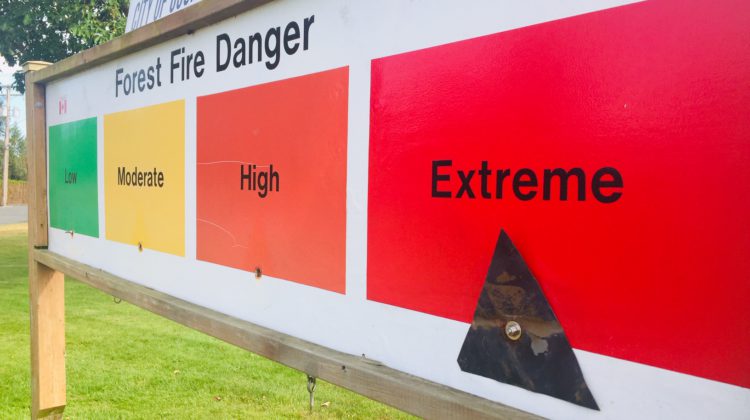 The fire risk is extreme in the Comox Valley. (Troy Landreville, MyComoxValleyNow.com staff)

So far at least, people are doing their part to prevent wildfires from starting in the Comox Valley.

Campfire, smoking and high risk fire activities bans are in place within all areas of the valley.

“To my knowledge there have been no fines issued in our area. For the most part people have been really good about following the ban and I think people appreciate the ban (is in place) because the way the fires have been burning in this province, they’re scared it can happen here,” he added.

“And it’s a very realistic possibility that it can happen here with how dry things are.”

Green says needles from evergreen trees are falling onto the ground and making the forest floor even drier.

He added that the few raindrops that we did get earlier in the week wasn’t nearly enough to dampen the fire risk in the valley.

“I had three calls yesterday, with people wanting to burn because it rained and they think it’s fine, and just because it’s rained a little bit doesn’t mean the ban has been lifted. The ban is still in place. The majority of the people are following the ban and I just encourage everybody to follow it.”

“The only fire that you can have in the province of B.C. right now is a CSA-approved propane fire with a flame height of less than 15 centimetres,” Green explained.

He said anything hot that touches dry brown grass is enough to set off a potentially “catastrophic fire.”