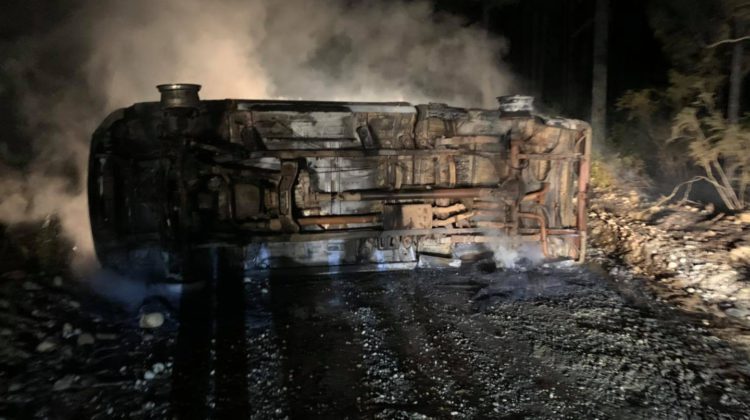 Another weekend, another vehicle fire.

This from Campbell River RCMP, after a truck crashed off Brewster Lake Road near Big Bay on Saturday (July 25th). Mechanical failure was to blame, causing the truck to flip onto its side, police say.

But the truck then caught on fire.

Police started making their way to the fire site, and once en route, they received further updates that the forest surrounding the truck fire was up in flames.

“The first officer arrived at the scene at 11:47 pm and immediately used up his fire extinguishers to knock down some of the blaze in the forest to create a bit of a fire line,” Cst. Maury Tyre says.

He continues, “The second officer arrived with more extinguishers, and he and the first officer expended those to prevent further forest spread along with two volunteers with a fire blanket.”

According to Tyre, help arrived by way of a water truck from a forest company.

“The driver from the truck that was on fire had gone to get the water truck the moment he realized his vehicle was on fire,” he says. “The two Campbell River RCMP officers tended the hose along with some nearby campers in order to help battle the blaze and put out most of the fire.”

Because the passenger in the truck suffered serious non-life-threatening injuries, police drove her to an ambulance waiting on Highway 28. She was then sent to the local hospital for treatment.

“Coastal Fire Centre arrived to mop up the remnants of the fire after the water from the water truck had been expended,” Tyre says, adding that a tow truck was called to haul the smouldering truck away.

Police note that this was the third incident of a vehicle fire on Forest Service Roads in as many weeks in the Campbell River area.

They’re now thanking everyone who chipped in to ensure the safety of the nearby campers at Big Bay, helping prevent the blaze from turning into a ‘fire disaster’.