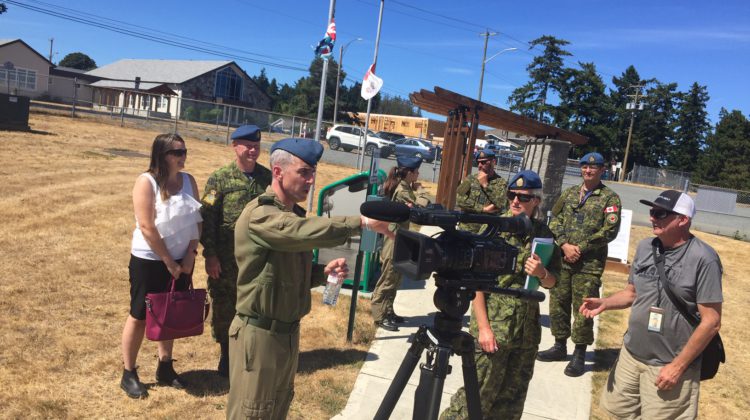 A press conference was held at CFB Comox, about what started a brush fire at the base. (Troy Landreville, Vista Radio staff)

A brush fire that started at CFB Comox is under control.

Base commander, Colonel Bryn Elliott, says it was a controlled explosion from their Explosive Ordnance Disposal (EOD) Unit.

“Normally we don’t do any explosions during July and August, however we did have a full locker, so we were totally full of stuff, and we had civilian contractors coming into the same building, so in order to assure the safety of those civilians, we decided to do an explosion today,” he explained.

He said the unit members did a subterranean explosion to minimize the risk and also sprayed the area with water. As well, the technicians were equipped with firefighting packs.

Elliott said that unfortunately, because explosions are unpredictable, a spark caught the brush on fire and it spread around 300 metres.

“The fire was contained to the base, some people probably saw that it went on the other side of our fence, however, it’s still DND (Department of National Defence) property, so it was maintained to the base, and the fire is under control right now.”

He says the E-O-D team that already had the equipment started to put the fire out… and the base’s fire department showed up within four minutes.

Comox Fire Rescue also arrived with two trucks to help with the fight.