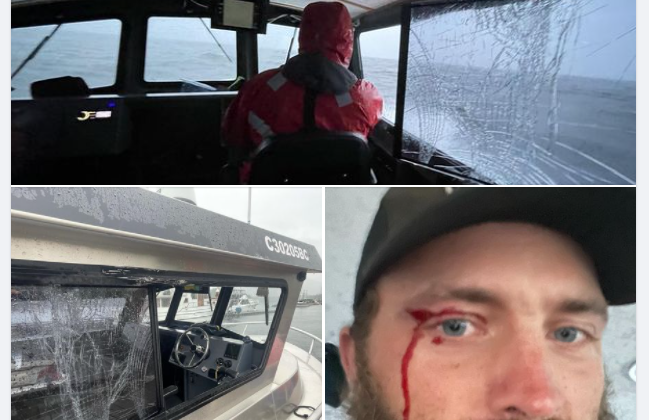 The Marine Education & Research Society is calling a recent close call with a whale off Vancouver Island a cautionary tale.

Last week, Charter Tofino shared its experience of a humpback whale suddenly surfacing 30 feet directly in front of their boat.

In a Facebook post last Thursday, Charter Tofino owner and operator  Kelly Aspinall said: “I slammed 500hp in full reverse and avoided the impact but the startled whale did a tail lob and contacted the driver side of the cabin. Luckily everyone including the whale made it out ok with just minor injuries. The repairs have begun and we are hoping to be back out on the water soon. This is a serious reminder to go slow and be hyper aware of whales in rough or foggy conditions. If you see a blow, always go slow.”

The society said they are “very grateful to Charter Tofino for sharing their reality so that more boaters might realize how serious the threat of collision is and how to reduce the chances of an accident.”

Jackie Hildering is a whale researcher with the society. She said the information shared by Charter Tofino is invaluable.

“We’re so incredibly grateful to Charter Tofino, to Kelly, for putting this into the world,” Hildering said. “For starters, it’s the law that it has to be reported. Most boaters aren’t even aware that you have to report entanglement and collision to DFO, which he did. And then he made the choice, (saying) my misfortune, despite everything I know about humpbacks, I am going to make sure this counts for boater education.”

Hildering noted that the public response to the post has been “really unfair in many cases.”

“The reality is, humpbacks are incredibly unpredictable, they can surface anywhere on our coast suddenly. The conditions were stacked against Kelly because it was crap weather. Even our host slogan on how to educate boaters of ‘see a blow, go slow’ would not have served him because he would not have seen the blow. He would not have been able to see things like bird activity that can suggest there is a lot of food and is a clue of where to go, and he knows the area, so this could happen to me, even with all my knowledge of these whales as individuals. I, too, could have the misfortune of hitting a humpback.”

She said ignorance is the variable of a humpback collision proving fatal: “So what Kelly did by sharing this strong visual of his cut face and broken window… because we are out there and we see everyday, boaters having close calls and they’re crossing through areas of known humpback density, they are acting as if there isn’t the awareness that a whale could suddenly surface. So him having done this amplifies our chances of reaching boaters, which is essential.”

A person is a paraplegic, kayaks have been flipped, and boats disabled, all due to whale encounters, Hildering points out.

“The reality on our coast is, one of these wonderful giants could surface anytime.”

According to Hildering, humpback whales on this coast are a game-changer for boaters: “We’re so lucky to have a second chance with them, having whaled them up to 1967, their numbers have increased all over our coast, incredibly.”

However, Hildering says humpbacks are incredibly different from orca.

“Orca are on the surface a lot; they have bio sonar; they have much greater awareness of where boats can be. If boaters do not understand that humpbacks are huge, they’re hungry, they’re directed at food, they do not have bio sonar the same way, so they can be astoundingly oblivious of boats.”

She said the lesson to boaters is to understand how humpbacks are different, the areas of density where you should have increased vigilance, and to understand that at any time, there could be a humpback surfacing in front of your boat.

For more information on boating safety near whales, visit www.SeeABlowGoSlow.org.