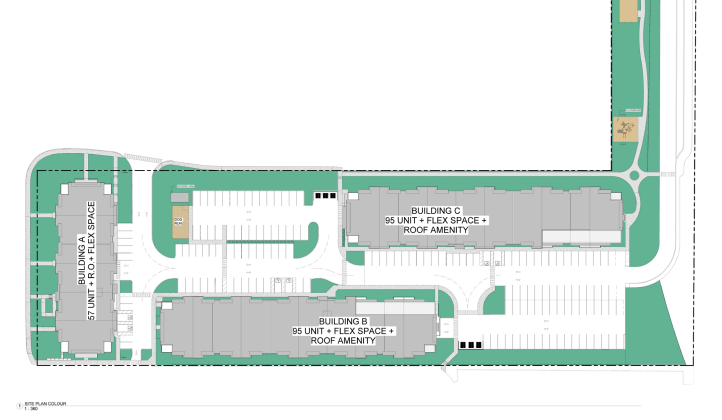 Supplied by the City of Courtenay Oct. 4th council agenda.

A proposed apartment complex in Courtenay is taking the next step forward.

On Monday, Council members approved first and second reading for a zoning amendment that could help pave the way for the proposed three-building, 247-unit rental complex at 801 Ryan Road.

The next step is a public hearing at a later date.

The applicant, Broad Street Properties and Seymour Pacific Developments, is proposing to dedicate 25 units, or 10 percent of the complex, as affordable rental units.

Rental rates will be calculated based on 30 percent of the gross household income levels published in BC Housing’s annual Housing Income Limits (HILs) publication.

The units will be secured through a housing agreement which will last for 10 years, after which the units will revert to private market rental rates.

“It will be the responsibility of the property owner under the housing agreement to ensure the units remain at the proposed rents,” a city report said.

Acting Mayor Will Cole-Hamilton was among those in favour of moving to public hearing.

“Twenty-units would be a considerable number of below- market rental units to be putting out to the City of Courtenay, and the reduced prices being proposed… would be $987 for a one-bedroom and $1225 for a two-bedroom, so a fairly substantial reduction from the numbers we’re seeing.”

The revised proposal also has 300 parking stalls, or 1.2 stalls per unit, which is down 13 stalls the previous submission.