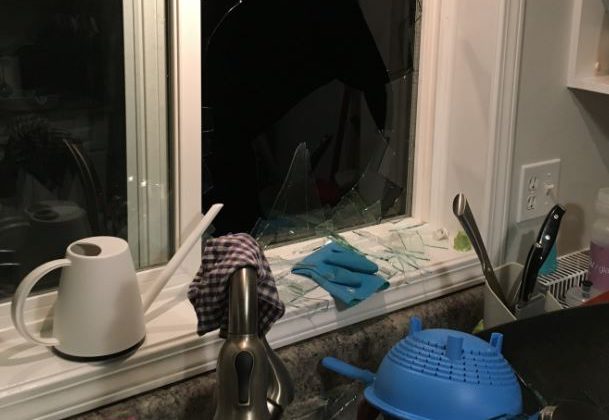 Duncan Hurd shared this photo of the kitchen window of his home in Campbell River after it was smashed by vandals back in June. (Supplied by Duncan Hurd)

A Campbell River father says he wants this year of terror to end.

Duncan Hurd says his home in the Hilchey and Dogwood neighbourhood has been a constant target of young vandals.

“For more than a year, my home has been attacked by teenagers,” he added.

They have escalated from throwing yard waste, to smashing fence panels.”

Then, back in June, someone tossed a six-foot fence board through their kitchen window at 2:00am.

Hurd says in total, about 40 to 50 feet of fencing were completely torn down, and five panels have been destroyed since last Halloween.

Meanwhile, the harassment continued this past Saturday when just after midnight, someone tried to break into Hurd’s home through our side door before taking off.

At the time, Hurd’s wife was already comforting their daughter who was having a hard time going to bed.

“This just makes us on edge,” he said.

“I have video footage of the kid who is wearing a distinctive ZooYork hoodie.”

Hurd says their neighbours have been very supportive. One has even adjusted their camera with the hope of catching the vandals in the act. Others have offered to rebuild the fence and to come over late at night to help keep watch.

The first step, Hurd says, is to identify the suspects, “and they are able to make some kind of reparations to us. It’s cost thousands of dollars of damage to the fences so far and I’m not going to rebuild them until these kids are caught.”

Hurd figures that he, his wife, and their five-year-old daughter are the victims of bored teenagers.

While he says there are homes across the street that had fence panels smashed, Hurd believes his property is the only one that’s been repeatedly targeted.

He said he doesn’t want to move “but it’s getting there.”

He said with the exception of one officer, they’ve been unsatisfied with the RCMP’s response to his situation

Tyre says the first instance was reported to police in November 2020.

He added that there have been six incidents in total and that there is an open investigative file.