The Rock Dawg hits the ring: PWA Canada in the Comox Valley 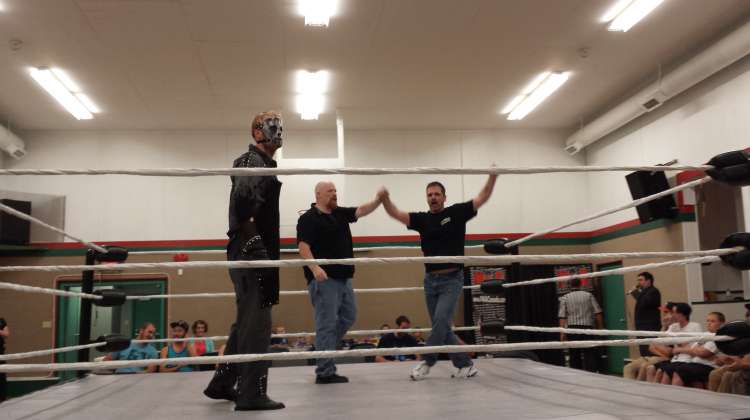 The PWA Canada crew was in the Comox Valley on Friday and put on a show that had everyone cheering.

The event at the K’omoks First Nation Band Hall started off with crowd favourite Krofton defeating Nick Radford with a cutter that got everyone on their feet.

Barry Goode then hit the ring, cutting a promo where he ripped apart not just the crowd, but the entire Comox Valley. The Goat FM’s very own “Rock Dawg” Andrew Davis, accompanied by Courtenay’s Sergeant Kaos, interrupted Goode and promised to take out Barry in honour of the Valley during their match later in the night.

The crowd was also reminded that if Kaos put his hands on Goode, Andrew would be disqualified.

This was followed up by a BC Championship match between E.O. Mike Becherer and Cremator Von Slasher. Barry Goode interfered and secured the win for Becherer, who had a mixed look of surprise and disgust on his face while refusing to acknowledge the help.

Krystal made her debut but lost a hard-fought battle against veteran Riea Von Slasher, who couldn’t help but trash talk the crowd throughout the match.

Justin Alexander defeated BJ Laredo with help from his tag team partner Nick Radford. BJ went to suplex Alexander into the ring and Radford tripped BJ, holding his legs down during the 3 count. BJ issued a challenge for the main event to be a tag match.

Rock Dawg’s match against Barry Goode had some epic highlights, including a Stunner to Goode from Davis that would have made Stone Cold Steve Austin proud. Unfortunately, the match ended in a no contest thanks to interference from Mike Becherer.

Sergeant Kaos and Cremator Von Slasher got into the mix, which led to the Rock Dawg announcing a big match for when the PWA returns to the Valley in September: Goode and Becherer teaming up against Kaos and Cremator in a Comox Valley Street Fight!