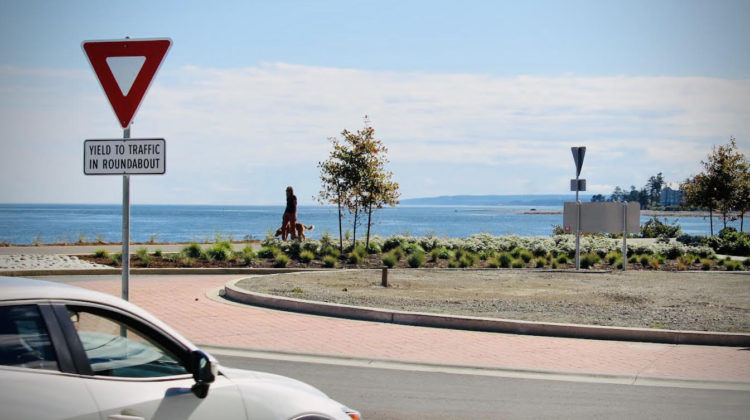 Approach, yield, enter, exit: It seems police in Campbell River are finding drivers around town need a refresher when it comes to using the roundabout at the Island Highway and Rockland Rd.

So much so, local RCMP Cst. Maury Tyre took to Facebook, posting a video addressing what he’s calling “the elephant in the room.” The two-minute video, uploaded last week, has actually surpassed 13,000 views.

According to Tyre, a lot of drivers are “really having some difficulties” when it comes to using the roundabout, which was installed earlier this year and is often referred to as a traffic circle.

“The biggest problem we’re seeing when people are approaching the traffic circle is they’re approaching it about 60 or 70 km/hr, which is already speeding on that section of highway,” Tyre said.

“You should be coming up to the traffic circle doing about 30 km/hr. There are actually signs that say so.”

When drivers approach the roundabout, Tyre said they need to slow down and only enter when it’s safe to do so.

“We only have the one-lane traffic circle,” he explained, “which means all traffic inside the traffic circle moves at a counter-clockwise fashion after you enter.”

However, Tyre noted that drivers don’t actually need to use their signal when entering, only when exiting. “This lets vehicles that are trying to get into the circle know you’re about to leave and that there will be space coming,” he said.

At the end of the day, drivers using their signals will make everyone’s life “a lot happier,” Tyre said, while ending on a humorous note: “I know a lot of people may be low on blinker fluid, so check and make sure your blinker fluid’s not low. That’s about the only reason I can think of why blinkers aren’t working. Maybe their lights are out, I don’t know.”

More roundabout tips for drivers can be found on the BC Government’s website.